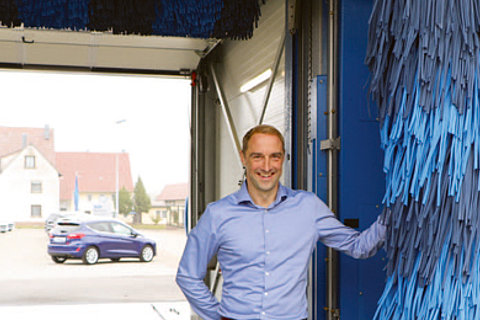 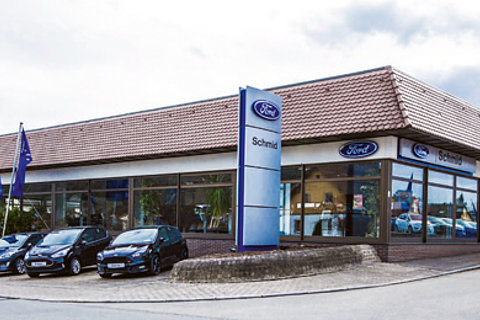 They still exist, the places where the world seems to be in order and some things work a little differently than in the rest of the republic. The small town of Vöhringen with a population of 4,300 in Baden-Württemberg, around 80 kilometres south of Stuttgart, is one of these places. There is full employment, many of the houses are not locked during the day and in some parked cars the ignition key is permanently inserted. It goes without saying that everyone knows each other. This was one main reason why Markus Jäger, the Managing Director of the Autohaus Schmid car dealership founded in 1950, decided from the outset that the opening of the new car wash in June 2018 would be marked by a celebration for all neighbours and customers – the slogan: washing, wheat beer, white sausage. "A celebration like this always goes down well in the village," says Jäger and laughs. In addition, it helped him to instil a positive opinion amongst the residents from the outset. After all, a car wash always causes a certain amount of noise and brings traffic with it. Until then – and this is no longer an everyday occurrence – the company did not have its own car wash. Instead, a retired employee washed the repaired vehicles overnight by hand. "This was no longer a solution in the long run for age reasons," says Jäger. At the end of 2016, when the only petrol station with a car wash in the surrounding area closed down, Jäger seized the opportunity to close the gap in the market and decided to build a new car wash on the neighbouring used car forecourt.

The car dealership has invested around 200,000 euros in this project. Accounting for 120,000 euros, a large part of this went on the construction of a new building and its development. The car wash itself, a WashTec Soft Care Pro Classic, cost 80,000 euros. "The decisive factor for me was that this model is largely maintenance-free and that no corrosion damage can occur due to the belt drive," says Jäger. Price drivers proved to be the requirement that the system should be large enough for commercial vehicles such as the Ford Transit, and the building regulations governing environmental protection.

One year delay due to regulations

In Baden-Württemberg, these regulations have for some years stipulated a closed water cycle. This meant that a water conditioning plant was necessary. An oil separator, which would have made engine washing possible, was excluded from the outset. There were also concerns about possible noise levels. These alone delayed the project by around a year, although the dealership had already decided to install expensive, ultra-quiet drying nozzles as a precaution. On top of that, the opening hours were limited to 7.00 a.m. to 8.00 p.m. and vacuum cleaners next to the facility were banned. The construction of the facility itself then went largely without problems. "The cooperation between WashTec and our regional wash bay builder worked well," praises Jäger. For example, the manufacturer passed on comprehensive system plans to the developer at an early stage and, in addition, helped with coordination with the authorities right from the start.

Despite the expensive requirements, the investment is quickly paying off for Autohaus Schmid. Among other things, because Jäger does not have to engage in any price wars due to the absence of competition. In addition, the catchment area and customer base are very large. "Customers are responding very well to the new offer," says Jäger. In the first three months alone, sales amounted to more than 10,000 euros. At the same time, the sales of the company's own petrol station have doubled, because many customers who actually only came to wash their car also go on to refuel. Another side effect of the car wash is that the number of potential customers who come into contact with the dealership has increased significantly. Parallel to the additional income, Managing Director Markus Jäger has been able to reduce the expenditure side because the time spent per wash is considerably lower and, as such, the personnel costs for cleaning after a repair are no longer necessary. Thanks to the water conditioning system, the costs for water and waste water are also significantly lower than for hand washing. In addition, the dealership was able to strike exterior cleaning from the contract with the used car valeting company. However, the savings and additional income are not the most important aspect from Jäger's point of view. "Ultimately, the most important thing is to deliver better service for our customers," summarises Jäger.

The key data at a glance