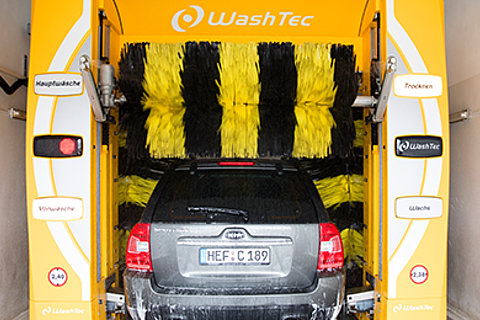 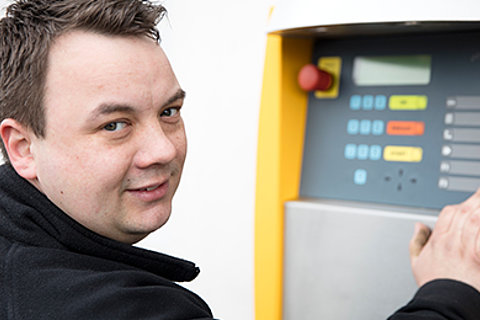 Father and son of the Hugo family are service station and car wash operators in Heringen and in the nearby town of Heimboldshausen, a district of the municipality of Philippsthal. Both premises are located in Hesse on the river Werra, just seven kilometres apart. When back in 1982 the father Reinhold Hugo first opened a car wash at his service station premises with car wash technology from the then Kleindienst, "we soon noticed that this wasn't the only place car washing was in great demand", his son Peter Hugo still recalls precisely. Consequently, a second gantry car wash was initially installed in Heimboldshausen. "An automatic car wash in conjunction with a service station should also work at the site in Heringen. We later complemented – again at both premises – our services with self-service car wash facilities."

Father and son are extremely loyal WashTec customers. In the past, gantry car washes from Kleindienst and California Rohe washed and cared for vehicles at both premises. When it came to replacing these models with new ones, the decision fell once again in favour of WashTec gantry car washes. And when these systems in turn began to age, "we again checked out the market for new equipment", says Peter Hugo. "The decision for new, efficient washing technology and for the manufacturers WashTec finally fell in March 2015. The most important reason here being the value for money."

This subsequently led to the two businessmen ordering four SoftCare2 Pro models. In Heringen and Heimboldshausen, WashTec supplied four identical gantry car washes in its yellow livery, replacing the red of the old car washes. "Customers must be able to see that new technology has been installed. And by changing the colour, they conclude that it is something new, in this case, state-of-the-art gantry car washes", assures Peter Hugo. Prior to the gantries being installed by the WashTec engineers, a local painter applied the necessary white wall paint in the two wash bays, allowing two very neat wash stations to finally be set up.

A good feeling on both sides

It is a good feeling to see customers drive their vehicles for example into the two Heringen head-end stations and manoeuvre them into washing position. Since both gantries are identical in terms of their technical equipment, customers do not have to decide under which gantry their are going to drive their vehicles. A good feeling above all because "we know that we are presenting our car wash customers with efficient WashTec technology, which cleans and cares for vehicles thoroughly, but gently. "The new technology works absolutely reliably and mostly without any trouble whatsoever. I am very satisfied", emphasizes Peter Hugo. At the very moment he is talking about it, the gantry on the left passes almost silently over a car, whilst the chemicals sprayed from the nozzles fan out over the vehicle surface. The gantries wash with chemicals from WashTec's subsidiary company AUWA. "I am very satisfied with the cleaning and care results and also with the pleasant smell", remarks Peter Hugo. The new gantries also win customers over because of their excellent results, because "we chose the system with oscillating high pressure from the side washers, the MultiFlex brush and a new dryer."

At the same time as the orders for the gantry car washes, the two innovative businessmen ordered two new containers for the existing self-service washing stations used to house the entire technology. Swapping containers was a straightforward process and was completed faster than expected. Peter Hugo is convinced that self-service washing stations only work well when used in conjunction with an automatic car wash facility. The three station car wash facility in Heringen – a real eye catcher for customers – now also offers power foam. Customers are impressed when they can wash their cars themselves with the lance and brush inside the white, but easy to clean partition walls. Customers find the new high-pressure lances and foam brushes easy to hold and thanks to the free-standing racks can also be conveniently set down again.

Generally speaking, one thing remains for every car wash customer when looking at the gantry car washes: "They can see three brushes moving", says Peter Hugo with a wink. The four new WashTec gantries and the self-service facilities from Augsburg-based WashTec at both premises will most certainly ensure that customers will gladly return, because for them, it is above all the results and the experience of the car washing that count the most. "As to how long the systems will be in use ultimately depends on how the washing business develops." About half a million has been invested in the future at both premises. Another thing that remains is the fact that "the developments in the car wash business generally advance very quickly. Which is why we regularly look into what we can do to set ourselves apart from the competition."