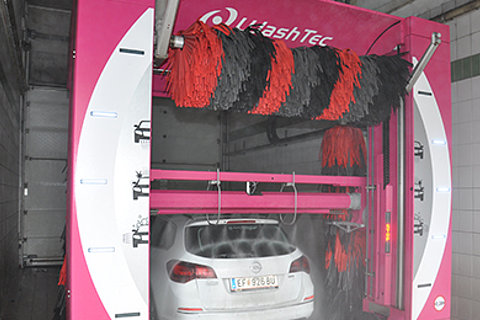 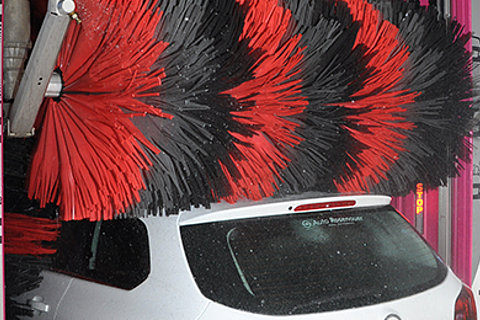 The petrol station market is becoming more colourful: an Austrian is pushing into Germany with pink petrol stations and car washes. The concept is proving highly popular - particularly with female customers.

Aral has a blue livery, Shell uses a bright yellow, whilst Jet uses a mat yellow, Esso and Avia petrol stations paint the roofs of their petrol stations red, Total has recently changed to brown. And in Austria, where Oskar Kreuzmayr was born and bred, BP has always used the colour green. In other words, a medium-sized petrol station operation cannot use colour to distinguish itself from the major competitors, right? Right – except by being brave.

Kreuzmayr is brave. Particularly in Austria where the petrol station density is 25 per cent higher than in Germany, the manager of an energy trading company has to be brave. “We were looking to introduce a different colour into the petrol station landscape”, explains Kreuzmayr. Consequently, the company opted in 2005 from five suggestions for what was in its own words the “zaniest”  marketing concept that an agency had devised. It envisaged immersing the new brand that was to be created in a lush, bright pink.

Naturally, for the sake of consistency, everything had to be painted in the shiny pink livery also in the five gantry car washes in Austria. Car wash manufacturer WashTec, with whom Kreuzmayr had enjoyed a trusting working relationship for years, was requested here to deliver the right equipment. “Taking the requested colour into account did not require any special input on our part”, explains Alfred Zach, managing director of WashTec in Austria.

When choosing the model, the car wash manufacturer and the petrol station operator agreed on the model Soft Care Pro Classic, which has been on the market for three years. “The car wash yields a profit from around 400 washes a month”, says Zach. According to him, the model delivers “top-class washing and drying results” and is easy to maintain thanks to its good design and build quality. Satisfied, Kreuzmayr acknowledges not only the quality, but also just how well the pink car wash integrates into the overall concept.

The unusual, intense colour is meant to attract motorists’ attention in the monotonous petrol station landscape – and above all female customers. Kreuzmayr describes the pink design slightly stereotypically as a “female-friendly colour”. With additional teasers, such as the Ladies’ Day, women in particular are to be targeted. At the station in Eferding, female motorists can really let themselves be pampered every Thursday. While the ladies enjoy a coffee or glass of bubbly, an additional employee fills up their vehicles and cleans them inside and out. This goes down really well with the ladies.

They also like the price. With the slogan “drive and save”, the company advertises its low fuel prices, which it claims to be on a par with Jet petrol stations. "We supply branded fuel at a low price. We want to get this message across to our customers”, explains Kreuzmayr.

The ladies can pay, but not just them, either conventionally or on credit. Although competitors also offer the option of billing at the end of the month, explains Julia Kreuzmayr, who is just starting out in marketing in her parents’ company, we have decided against a bankcard in favour of a keyfob token – naturally in pink, which customers can conveniently carry with their car keys rather than in their purses, which are already bursting at the seams with bank and loyalty cards. Several thousand of these tokens are already in circulation. This enables customers to pay conveniently at the petrol pumps with their PIN code when the manned stations switch over to automatic outside business hours.

The first Pink branded petrol station went into service in 2006, there are now 16. Most of them are located in the federal state of Upper Austria, in which the company is headquartered. However, the Austrian has exported two stations to Germany. In 2009, the Kreuzmayr group took over OMV Bayern. Consequently, pink petrol stations can already be found in Pfaffenhofen an der Ilm and in Pentling. The Austrian company has nothing to do directly with “Pink Tank”, the Hamburg petrol station, which Sprit+ presented in issue 3, and has concluded a 'gentlemen’s agreement' by way of a precaution so as to be able to operate alongside one another.

However, the branded petrol stations are peanuts in comparison with the true size of the petrol station network. In Germany, we are now three times bigger than in Austria, says Kreuzmayr. Many petrol stations of the company group trade under the name of Shell or BFT petrol stations. “Wherever the concept fits in, we will be switching over to Pink over the next few years”, says the company boss. However, anywhere a brand or family name is particularly strong in a town or neighbourhood, the company will retain the name.
At the same time, Kreuzmayr is fully committed to expansion. The 14 employees in 2003 have grown to 340 in number over the past 13 years. By taking over his father’s mineral oil business, Kreuzmayr has diversified the company and today trades with heating oil, diesel, AdBlue, pellets, firewood and lubricants.

He is looking to further expand his petrol station network through acquisitions. In doing so, he prefers to invest in family businesses in which the heirs no longer wish to or are no longer able to carry on the business. “We only acquire companies, however, to which the employees are committed”, he emphasizes, “since it is the quality of the employees that determines how much a company is worth.” As a medium-sized entrepreneur himself, numerous business partners entrust their businesses to him also because he always endeavours to retain and continue to employ all the staff. Incidentally, all the staff working at the Pink stations are employees of Kreuzmayr.

The feedback from the employees, business partners and customers confirm that they like the concept and the colour. “We wanted something totally different, and our success proves us right!”, says Kreuzmayr confidently. As to whether the same applies to the German petrol stations, only the next few years will tell.