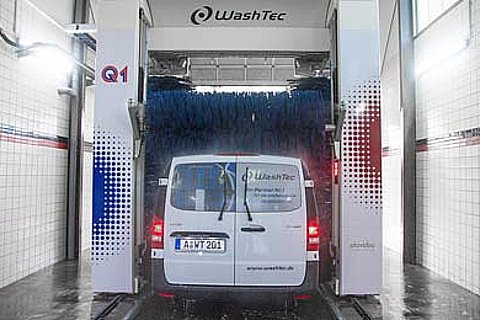 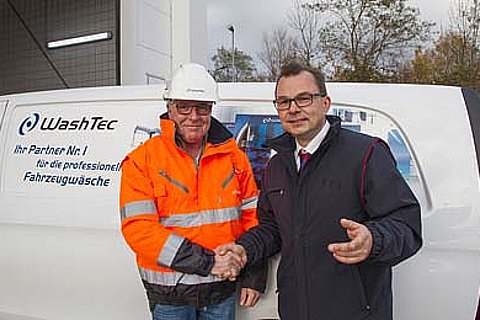 WashTec’s contractor fitters only needed four days under the direction of service and installation engineer Jürgen Reinert working alongside installation coordinator Uwe Roloff to install a large gantry car wash for vehicles up to 3.20 m high on the Q1 petrol station site in Rostock’s fishing port. The SoftCare Pro Classic XL 320, which the visionary petrol station operator Tobias Brack commissioned from the global market leader WashTec, has been washing large vans up to 3.20 m high since mid-November 2015. The facility even manages to clean the rotating lights up to 20 cm high mounted on the vehicle roofs without any difficulties. “I opted for a gantry wash with a swivelling roof high-pressure nozzle and van mirror programme so as to offer an even higher standard than in the car wash”, says Brack explaining one of the key results from planning ahead. He remembered how, long ago, the truck wash at that time had only been used to 20 per cent by trucks. “The percentage of vans that used the truck wash was, at that time, already around 80 per cent. That really was the case, even though the customers knew that the facility did not dry their vans.”

After joint discussions especially with his wife Heike, also a petrol station operator, weighing up the pros and cons, and against the background of there being no vehicle drying function, in the summer of 2015, Tobias Brack launched a survey at Q1 petrol station, spoke to customers directly and rang numerous companies in the surrounding area, whose fleets comprised vans and minibuses. “They all responded saying they have the same problem”, said Brack. The reason behind this were the over-large external dimensions of vans that prevented them from using the car wash, long waiting times in front of competitors’ truck washes and the excessively long washing times in the self-service washing booths. The longer we had to wash vans here ourselves with high-pressure cleaners and sponges, the more expensive each van wash was for the operator. Finally so expensive that a dispatcher – not least due to the legal minimum wage – can hardly afford to or want to pay such high operating costs. What is more, wash customers with high vans did not always manage to divert to the self-service booths, because the booths occasionally lacked height. A vicious circle. With WashTec's new automatic van wash, the vehicles are washed, protected and dried within just a few minutes. It is also pleasing that the wheel washers of the Pro Classic XL 320 are capable of washing larger wheels. “I am thinking about wheels with 19, 20, 22 or 23 inch diameters“, emphasizes Brack.

The conditions for WashTec's SoftCare Pro Classic XL 320 on the petrol station site opposite the Warnow were ideal, above all because petrol station operator Brack could reactivate the bay once used for the truck wash. Prior to this, WashTec’s installation coordinator Roloff inspected and assessed the building conditions as to whether they met the requirements of the wash gantry, which is the same height as a single-storey house. He also commissioned the contractor. “We were awarded the Rostock contract about a week before the delivery of the planned XL 320", recalls technician Jürgen Reinert. There were no nasty surprises, since the installation coordinators had already calculated and defined the personnel and time required in advance. “We then just consult the plans to see what exactly we are dealing with on the construction site", says Reinert.

In Tobias Brack’s case, this meant that he had a new washing facility up and running for customers within a very short time. “We aim to minimise the wash’s downtime. Dismantling the old commercial vehicle wash only took a week, and a mere four days to install the new SoftCare Pro Classic XL 320 gantry wash”, reported Reinert. Generally speaking, we don’t encounter any problems installing new gantry washes. Sometimes however it is a matter of tweaking the new technology and existing equipment to the particular system. Here in Rostock, this applied to the water recovery system, since both – the new van and the existing car wash – were supposed to use the same water conditioning plant.

The system technology always has to be programmed prior to commissioning in line with the requirements and performance.  Ingolf Olbricht, service consultant responsible for car wash technology at WashTec, did this by connecting his laptop with the system electronics. This is necessary in order to program the software of the newly installed gantry wash to perform the services it is meant to deliver in future. Olbricht puts his thumbs up to indicate that he has finished programming the system. It is the all-important sign for Uwe Roloff to finally release the system for the test run. A moment later, the gantry is purring to and fro, the roof brushes and side washer rotate, while the nozzles spray washing water and chemicals. “From my long practical experience of installing systems, I can confirm that washing systems from WashTec work without problems in 99.9 per cent of all cases after commissioning”, highlights Reinert. If one or two teething problems are encountered in the start-up phase, service engineers “are on site at the latest half an hour after me making my call“, said Tobias Brack praising the service after a good two weeks’ washing operation.

The three probably most important reasons why Brack‘s new van wash will be successful are plain to see – innovative system technology from WashTec, the constantly growing van market with higher and longer vehicle model designs (because fleet operators and transport service providers want to save on toll charges), and the fact that existing wash bays are lacking height to allow the installation of gantries over three metres high.

In parallel to the premiere of the WashTec van wash, Tobias Brack is arousing interest amongst businesses with fleets of vans via the radio station “Ostseewelle”: “We wash every van up to 3.20 m high… in the new Q1 washing facility at the Q1 petrol station in Rostock’s fishing port.“  The commercial is initially being broadcast a number of times a day through to the year end. “For the first quarter of next year, we would like to renegotiate with Ostseewelle”, says Tobias Brack looking ahead.  In addition, he has had eye-catching flyers made for handing out to petrol station customers and transport companies in the surrounding area. And for the wash bay roof, the medium-sized oil company Q1 had a sign made with the inscription “Van wash” that can be seen from afar.  Customers will shortly come to appreciate this special van wash in Rostock and the surrounding area – most definitely for the quality from the world-renowned Augsburg-based washing facility manufacturer WashTec.