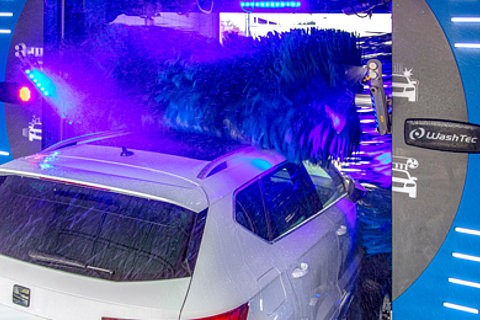 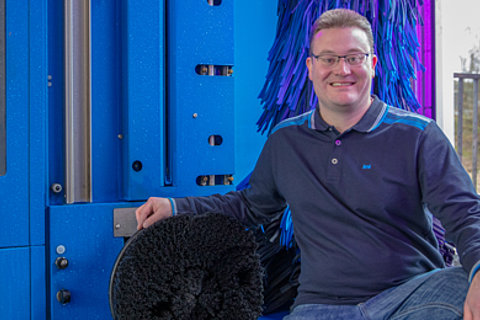 André Jung, now 37, a graduate in business administration, saw motor vehicles being refuelled and washed by hand even as a young boy. Because he grew up at the station his grandparents built in the 1960s. His parents took over the petrol station and car wash, but did not run them themselves and leased the station from 1980 to 2012 first to the mineral oil company AVIA, later to the German market leader ARAL. "When the lease with the ARAL expired, I decided to run the station under the blue flag again as an owner-operated petrol station. Choosing a strong brand partner was certainly not a bad choice," says André Jung, describing his initial situation seven years ago. In 2016, he took over a second petrol station in Netphen, ten kilometres away. The independent petrol station belongs to Bellersheim Tankstellen GmbH

Back to Hilchenbach. In addition to the petrol station forecourt and petrol station shop, just a few steps away there is a wash bay in which WashTec's high-performance gantry SoftCare² Pro XL washes all vehicles up to 2.60 metres high and 2.58 metres wide. "The predecessor model also came from WashTec. The WashTec service technician was a former acquaintance of my late father. After taking over the petrol station and car wash in Wittgensteiner Straße, I had very good experiences with WashTec. The first system was the first generation of SoftCare, the special edition with the flap on top. The gantry delivered excellent washing results. We received a corresponding response from our customers." It only needed a general overhaul once, because André Jung cared for it very conscientiously. He gives the following reason: "The whole business often stands or falls with this, because customers naturally like to drive their cars into a clean system." It was even possible to increase the number of washes with this system, even though it was quite old. The system was particularly convincing because it did not break down very much. "For the operator of a car wash, that's a crucial aspect."

This gives rise to the difficulty of not missing the time to renew the gantry. "I was already thinking about having a new system installed in 2014 and 2015. When a machine, despite its age, delivers excellent washing results and customers are very satisfied, it is admittedly difficult to decide on a new system. So I kept it running until summer 2018, whilst keeping an eye on new developments in the car wash industry." At the same time, cars continued to develop, their external dimensions increased as did their wheelbases. The fact that the competition in the Kreuztal, 15 kilometres away, decided to modernise also led to the consideration of installing a new system. "Establishing an alternative here almost simultaneously was the right thing to do."

At the beginning of 2018, the idea of acquiring a new gantry car wash finally matured. André Jung doesn't like half measures. That's why he had changes made to and in the wash bay beforehand, not only replacing the worn bay doors, but also completely modernising the bay. As the architect's plan gradually became a reality, André Jung intensified contact with WashTec. "I looked at various gantry models and sounded out which technical and visual features I would like to equip the future gantry with, and worked with WashTec's assembly management to draw up a schedule for dismantling the old system and installing the new gantry. We first dismantled the old SoftCare system. We then gutted the bay." The builders then came in, did the necessary civil engineering work, laid new water pipes, supply pipes and a special high-pressure pipe, replaced the entrance and exit gates and the paving. The water conditioning plant was also replaced, because "we had an old treasure from California Kleindienst. WashTec's AquaPur now takes over the task of conditioning the process water." Almost 100% of the washing water can now be recovered. "It works brilliantly," says André Jung, praising the powerful and sustainable solution, which, above all, efficiently reduces his operating costs. It has a fairly easy life. Because "we have relatively soft water and usually don't need a lot of additives. This is another reason why washing machines last so long here."

WashTec was able to deliver and immediately install the SoftCare² Pro on 27 August 2018, thanks to the exemplary performance of the tradesmen from the region. "That was quite a spectacle." The installation on new rails with wider track took three days until everything was connected. On the last day of August, a Friday, it was tested for the first time, before commencing regular operation for the customers just one day later. "It passed its baptism of fire in excellent fashion with a great crowd in front of the wash bay. As soon as the construction fences disappeared, customers were literally chomping at the bit to finally be able to wash again," laughs André Jung. To the question of whether he was proud of what he had accomplished, he replies: "Yes, most definitely. Especially because the system is proving so popular, even though colleagues described September 2018 as a gloomy month for the car wash business. We managed several hundred washes in the first few weeks. Even the AUWA consultant was completely thrilled that the system had been washing vehicles so often in such a short time.

An important prerequisite for this outstanding performance was probably the decision to incorporate numerous high-performance features in the system. The top-class equipment finally chosen – WheelJet wheel washer for reliable cleaning of small rims up to 21 inches in size and MultiFlex multi-dimensional side washer, which adapts flexibly to any rear end and can also clean sills and spoilers much better – impresses customers. "The washing of the rims is particularly appreciated, as we now have larger wheel brushes and achieve better results with the larger rims. Thanks to the rim foam, which lies on the rims like shaving foam, the result is truly excellent." StarTrack guide rails with variable lighting patterns show customers the way and make it easier for them to drive under the XL gantry. LEDs provide a multi-coloured light show throughout the washing, care and drying process. In addition to the exemplary car wash results, customers, especially the drivers of tomorrow and further into the future, also perceive it as a very special experience.

André Jung also uses the new construction of his car wash to get away from the washing card system. "We switched to the ticket system. A data cable was laid underground for this purpose. It connects the car wash with the Multibox, which prints the barcodes at the checkout. This also benefits my petrol station team. The trips from the shop to the card reader at the entrance and back are no longer necessary to pick up used washing cards." – Customers benefit from further rewarding details. "The new system also improved the drying results. They have definitely become even better, especially since the roof nozzle can also be swivelled to a certain extent. We don't have the 360-degree swivel nozzle, but the fact that it can also follow the contours a little more clearly has improved the result. The blower is also slightly more powerful than its predecessor. Another important reason is the use of new chemicals, AUWA's DryTecs."

"We were helped by the fact that we opened earlier than the new car wash in Kreuztal. This allowed customers to convince themselves of the performance of our system first. We also initiated advertising measures, fastened a giant cube on the roof with the message 'New washing technology', provided information and documentation about and from the new SoftCare2 Pro on our Facebook page. We advertised in the local press and wrote about the upgrade and performance of our new gantry car wash in an illustrated text in the Saturday edition. This was very well received in the town and surrounding area."

With WashTec everything was done right

Whether in hindsight he would have done something different is a question André Jung denies without having to think about it. He praises the architect as an "important figure", the tradesmen as well as the WashTec fitters and the AUWA sales representatives. They always solved problems promptly. "I was able to draw on many local players for the construction. Some of them are also customers at my petrol stations and car washes. A good feeling of mutual giving and taking on equal terms came about. Local tradesmen are much more flexible and are willing to work on Saturdays to keep to the schedule." – And something else is extremely remarkable. "In the course of the construction work, we had the back of the wash bay decorated. I met a graffiti artist. He presented me with various designs that had to do with car washing and petrol stations. While the system was being installed, he stood on the lifting platform to spray a work of art reflecting our services onto the back wall of the wash bay. Not every petrol station has something like this and it rounds off the overall picture very successfully." Travellers passing through Hilchenbach by train can see the amazing wall from the window. The artist sprayed an American road cruiser, probably from the 1960s, petrol station and car wash on it. Car wash customers first have to "go down" the stairs to marvel at the work of art. It is definitely worth making the effort.