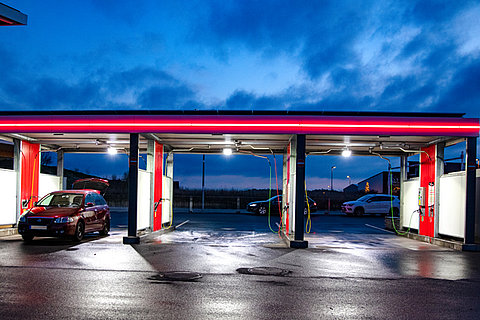 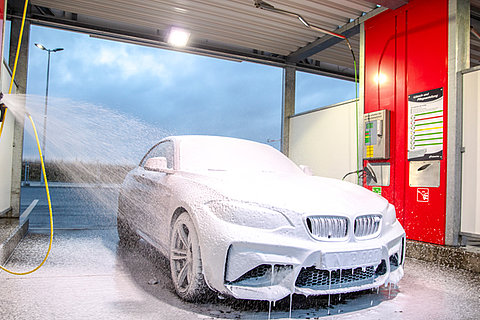 Fascination in the twilight hour

When the light sensors detect that the twilight hour is about to begin, the bright LED lighting of the new self-service car wash in Diepersdorf, a district of the central Franconian municipality of Leinburg in the immediate vicinity of the Nuremberg motorway junction, switches on automatically. At this moment, a sharp light-dark contrast is created, which effectively highlights the JetWash system with its red colour design and makes it visible from even greater distances. An illuminated fascia gives the complex a dignified, inviting setting. The modern three station facility from WashTec, the Augsburg-based car wash manufacturer, is located with an unmanned AVIA petrol station on a very large site on a relatively narrow road leading to a small industrial estate. "We commissioned an estate agent to search for petrol stations and car wash centres," says Siegfried Büttner, authorised signatory at Ernst Braun Mineralöle GmbH in Nuremberg and responsible for projects, marketing and petrol stations. "After positive sales developments of Avia Xpress unmanned stations already realised in conjunction with car wash centres, we know that this type of installation is becoming more and more popular."

The decision as to which car wash manufacturer would be commissioned to install the innovative technology solutions did not have to be renegotiated, as Braun Mineralöle is also established at other locations with WashTec technology. After one and a half years of operation, "we can state that the self-service washing is proving very popular." So good that there could have been one more washing station. Above all for "peak times", in order to be able to offer the self-service washers the best conditions with only short waiting times. "The business in the self-service stations is similar to that at petrol stations. In 20 to 30 per cent of the opening hours, 80 per cent of the turnover is made." The competition in the indirect surrounding area at a tyre dealer's in the next town and self-service washing booths in the next small town, as well as in the industrial estate is far enough away to make life difficult for each other. "Here in Diepersdorf, we benefit from the industrial estate, the road and the town.

WashTec's JetWash equipment is exactly what Diepersdorf self-service washers want – powerful, flexible and individual. The colour concept simplifies the washing process, the operation in the correct sequence and, above all, delivers brilliant washing results because the vehicles are cleaned and maintained with AUWA washing chemicals – optimum effect in all areas, highly targeted and very efficient. "The colour concept makes things a lot easier for customers. The colour coding on the programme signs and the correspondingly coloured hoses on the lances and brush give you assurance when picking up the right cleaning device." The self-service washers are particularly pleased that they are offered power foam. "When it came up at that time, the decision at Braun was in favour of power foam," Siegfried Büttner remembers well and also says: "The effect and the smell convinced us to include this programme." Intensive pre-cleaning is followed by power foam, high-pressure washing and foam application with the brush, intermediate rinsing, wax care and spot-free rinsing. Three LED lights on the control panel show the customer the current programme. If they continue switching, an acoustic signal confirms the pressing of the key. The clearly legible credit information is displayed in plain text. Self-service washers pay with tokens, which they receive beforehand at the change machine. The machine is mounted on an outside wall of the technical room.

Technology at the highest level

All WashTec components were comfortably housed in the technical room. The high-quality low-maintenance technology ensures that the washing booths are in continuous operation, even in the winter months. If the outside temperatures drop below zero degrees, the frost protection system is automatically activated. The floors are also heated, "so the frost doesn't get in." An osmosis system guarantees that the vehicle surfaces dry spot-free. The electricity required for the operation of the system comes from the solar modules of the photovoltaic system, which are installed on the roof of the maintenance stations. Electricity that also ensures the operation of the heat pump in order to keep the water in the storage tank warm. If the amount of hot water is not sufficient due to the high washing volume, "we can also heat up more water because we had an additional heater connected. The storage tank has been designed so large by WashTec that the amount of water is sufficient." The electricity we produce ourselves is mostly consumed by the system itself. "The heat pump needs the most electricity. We feed the unused electricity – about ten per cent – into the public grid."

For cleaning their vehicle interiors, customers use two uncovered vacuum stations, each equipped with a double vacuum cleaner and mat beater, located opposite the three self-service washing booths. Customers who want to clean their floor mats with the mat cleaning device, which cleans both dry and wet, use the electric floor mat cleaner next to the washing booth. Two individual self-service vacuum cleaners are located at the six maintenance stations under the roof.

Plenty of room for WashTec technology

The management of Braun Mineralöle, however, abandoned the original plan to build only an unmanned petrol station on the premises, as the site was far too large for this. "That's why we were thinking of building a self-service car wash station." Further considerations for the future use of the site focused on the exciting topic of electromobility and a large photovoltaic system. Parking space to recharge electric vehicles at fast-charging pillars would be a good idea. A covered area could be built over the vacuum cleaner and maintenance stations. "As an energy supplier, you also need to think outside the box and be well positioned for the future. Most of our petrol stations – if large enough – are already equipped with a photovoltaic system," says Siegfried Büttner. After a thorough site analysis, which "was based on the fuel analysis for the planned unmanned petrol station, we prepared the site concept for the plot. The management finally decided in favour of an unmanned petrol station, a self-service car wash centre, double and single vacuum cleaning stations as well as maintenance stations, most of which were to be under roof and fitted with photovoltaic modules. The solar modules are expected to generate a total of almost 100 kilowatts of peak electrical power.

Prior to the start of construction in August 2017, important documents had to be submitted in order to obtain official approvals. "We are in the industrial estate here and had to submit a noise protection report, for example. The noise measurements showed that we were below the permitted level of noise emissions from external noise." The construction work was completed as early as October 2017, although the clay soil had to be replaced in order to improve the load-bearing capacity of the ground. First sales started in the same month. The petrol station is open around the clock, the opening hours of the self-service car wash are very long – Monday to Sunday from 06 am to 10 pm. "We tried very hard to get the authorities to approve long opening hours." A CCTV camera system monitors the entire premises.