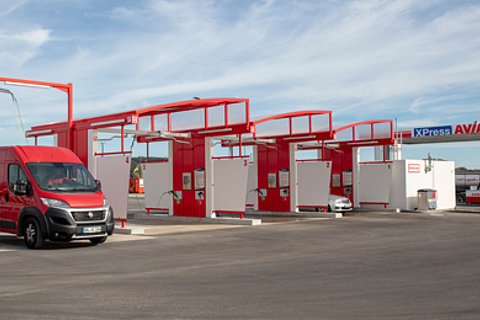 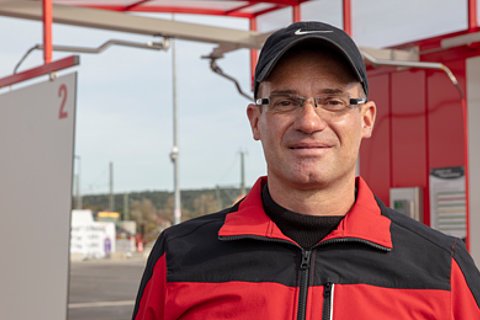 Frank Güllich from Lehrberg learned the profession of a bricklayer and later passed his master's examination. He then founded a construction company. Subsequently, he bought plots of land that seemed good to him for building houses on, with the intention of renting them out. Since it is very dirty on construction sites, he had to wash his vehicles regularly. "I've always liked washing cars," reveals the master bricklayer, who did these chores himself. His 'regular jaunt' was to a self-service car wash in Ansbach. "At some point, I figured I could offer such a service to motorists, too."

Only with the right concept

Other construction projects were initially the reason why he postponed his start in self-service car washing. Shortly after completing the last construction project, "the idea of the washing booths crossed my mind again. In August 2016, I drove to the local authority once again and presented my request to purchase a plot of land for a modern self-service car wash." His plan was to purchase land for it directly on the Lehrberg bypass, which was completed at the end of 2010. The busy B13 starts at Würzburg, leads past Lehrberg to Ansbach and on to Ingolstadt, Munich and finally Bad Tölz. "Up to 15,000 vehicles pass by here every day," Frank Güllich has known this for a long time. That's why it was important to him to buy a piece of land for the car wash right there. There was plenty of free space. However, the mayor of Lehrberg rejected his request to purchase a 2,500 square metre site there. She argued that something 'sensible' belonged in the front row. Since Frank Güllich was already in contact with a WashTec customer advisor, he explained the problem to him. The Augsburg consultant suggested combining self-service car washing with a petrol station and put him in touch with Ernst Braun Mineralöle GmbH in Nuremberg. Authorised signatory Siegfried Büttner, responsible for projects, marketing and petrol stations, drove to Lehrberg, met Frank Güllich at the site and told him, okay, the location fits. Both then drew up a precise location analysis and a sensible business concept for an Avia automatic petrol station open 24/7 without a shop, but with a self-service car wash, including a snack bar. The mayor finally approved the planned project and concluded the purchase contract with Frank Güllich for a 4,000 square metre site.

He first found out about car washes in general and the self-service washing business in particular on the Internet. "As a master bricklayer, I had no idea about the car washing business." In his web-based research, he also found out who made the best car washes. It was stated there that WashTec is the world's leading supplier of innovative solutions for all aspects of vehicle washing. "I took a very close look at their self-service system technology and the design variants on the web, and then I couldn't get away from WashTec." During the planning discussions, it quickly became clear what the future station would look like – three washing booths, an uncovered washing area with stairs and walkway, rack installation, heated floors in the booths, osmosis plant due to the chalky water. "I really wanted a shed roof for the washing booths, because it's simply the most attractive in terms of the design. In the first row, they are now a real eye-catcher." The booths are much wider than the standard. Customers can step back if necessary to avoid standing in the spray from the water, especially when the wind blows through the booths. "Vehicles are also becoming bigger, the standard size of the washing booths is now too small in my opinion. My uncovered washing area is also bigger, the gantry and walkway are longer. This means that there is plenty of space for vans. Customers notice this and sometimes even tell me." Frank Güllich followed the red of Avia for a matching look to create a harmonious whole. The washing booths are opposite four vacuum cleaner stations, which are also wider. "I wanted customers to be able to open their car doors properly."

Frank Güllich offers his customers six washing programmes based on the SelfTecs concept. A concept that simplifies and shortens the washing process and gives the customers better washing results. He opted for the traffic light colour code in the washing booths so that his customers could select the appropriate washing implement after selecting the respective programme step and not be confused. In contrast, customers wash in green-yellow in the uncovered car washing area. He chose power foam and the high-end polymer ShieldTecs to offer his customers the best for their vehicles. Customers immediately notice how well and for how long the snow-white power foam adheres to the vehicle surfaces. "The wax is the best. If customers leave it out, they get a token from me to test it. Of course they notice the great effect. That was and is the best advertisement for me and probably the main reason why many customers come back after only three weeks". Frank Güllich also set the washing times very fairly. "I don't want to make a quick buck, I want the customers to come back and keep coming back." The operator terminal requires cash to start each wash. The terminal accepts 50 cent, one and two euro coins. "The coin changer also takes banknotes from customers and gives them back tokens of the same value.

The committed operator personally takes care of the facility in the start-up phase, talks with the customers, explains the washing programmes again and again. He gives them flyers to take with them for their friends and colleagues at work and distributes them by post to the surrounding areas. The number of customers is growing almost daily, the next self-service car wash is six kilometres away. Less obvious is his commitment to doing good for the environment. On the roof of his small garage complex, he has had a photovoltaic system installed that can produce 16 kilowatts of peak power. That's why he tilted the roof slightly. The resource-saving system supplies the self-service facility with electricity when the sun is shining. A gas boiler operates the heating. For a different constellation "I would have needed an expensive heat pump. Photovoltaics is a clean source of energy, which will also have a positive effect on my electricity bill." It is practical and advantageous that he can use a garage as a warehouse for AUWA washing chemical products and as a storage location for other equipment. He rents the other garages to owners of luxurious passenger cars, which are not supposed to stand outside overnight in bad weather.

Frank Güllich had the entire premises illuminated with LED lights, the strength and colour of which he adapted to the existing street lighting. They light up at all hours of the night, not only during the opening hours of the Lehrberg car wash centre, which is open from 6 am to 10 pm, seven days a week. "For me, brightness is important at night. Above all, I want to give the customers a good feeling of security, also in the area of the unmanned petrol station." – By the way, the petrol station "bought" itself into the technical room. The electricity connection installed there is shared between the self-service car wash and the petrol station. When Frank Güllich finally talks about project details, it quickly becomes clear that he was struggling with quite a few challenges during the construction phase. His conclusion: "The self-service car wash and petrol station project was implemented in parallel. I built most of the facility myself and was on site every day from seven o'clock in the morning until ten o'clock in the evening for more than four months, putting in a lot of work myself. Otherwise the costs would have got out of hand and the profitability would have suffered." He cites a good and at the same time challenging example by way of illustration: "I was very surprised by the groundwater conditions. If you dig two metres into the ground here on this green field site, the hole immediately fills up with water. That's why we had to install pump shafts to lower the groundwater level in order to be able to work at all. The soil was so unstable that we had to prepare it with a half-metre-high lime-cement mixture to make it solid. For civil engineering and asphalting, I commissioned a company. The paving was laid with a machine, 500 square metres in one day. Without putting this work in myself, I would not have been able to realise this project."