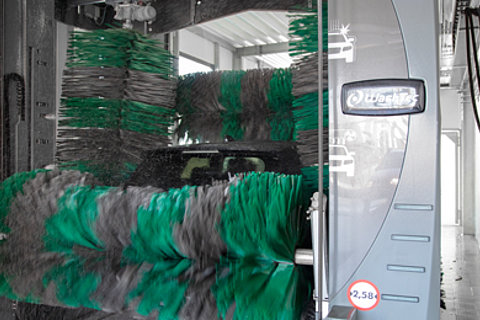 Werner Cunow operates two petrol stations between Bremen and Hanover – the Cunow petrol station in Marklohe and the bft petrol station in Nienburg an der Weser. "We took over the Nienburg petrol station because it resembled the station in Marklohe, where we are also based, and it fitted our concept," Werner Cunow begins the story of his involvement with the petrol station and car wash. When he took over the bft petrol station in 2007, the complex also included a conveyor tunnel car wash, "probably the first facility of its kind" in the almost geographical centre of Lower Saxony. At the time of its takeover, the car wash was already well advanced in years, and clear signs of use could be seen everywhere. Nevertheless, Werner Cunow washed vehicles for another ten years with the ageing washing technology and its limited possibilities. "It was really old. As far as I can tell, it was probably the oldest conveyor tunnel car wash in Germany," oracles the Lower Saxon. Normally – and he knows this himself – he should have completely replaced it at that time.

USP in the region

Werner Cunow is after all searching for modern washing technology in order to be able to offer his customers up-to-date cleaning and care for their new and above all increasingly larger vehicles. In addition, the car washing situation in Nienburg had changed in the meantime, as another conveyor tunnel system opened in the vicinity. It is only about 300 m away from the bft petrol station and also on the busy B 215 main road. "We were therefore looking for a car wash that resembles a conveyor tunnel system and found just the right thing with the world market leader in vehicle washing, WashTec." Werner Cunow learns about the excellent performance of the SoftCare2 Juno Takt gantry system from WashTec area sales manager Dirk Merschmann before making his final decision. Its hallmark is thorough, gentle and exceptionally quick cleaning and care by means of roof brushes and side washers. A car wash that was to be equipped with green-grey SoftTecs® Pur material and technical options of a SoftCare² Pro gantry car wash. A car wash that was to incorporate a powerful underbody washer as well as WheelFlash and WheelJet to first apply the chemicals precisely to the wheel rim surfaces of up to 21 inches and then clean them thoroughly. A gantry whose technical features were also to include oscillating lateral high pressure, which is particularly effective in the sill areas that are difficult to clean.

The SoftCare² Juno works with a second roof washer. It not only enhances the cleaning performance, but also enables shorter washing times. In contrast to other gantry systems, the SoftCare² Takt system dries separately. The dryer gantry, equipped with powerful roof and side dryers, begins its excellent drying of the vehicles as soon as the vehicle reaches the stop position in the drying zone.

Werner Cunow opted for an extra-high gantry which enables him to wash vehicles up to a height of 2.80 metres. He also went 'the whole hog' in terms of washing width and chose the XL size of 2.58 metres. This created the necessary conditions for washing high-sided cars, vans and minibuses. "The van market has more than doubled in the last ten years. Offering these customers the possibility of an automatic vehicle wash was part of the considerations of the petrol station and car wash operator when deciding on the extra-large dimensions," confirms Dirk Merschmann.

Werner Cunow chose the "Silverlight" design to match the performance of the washing gantry in order to convey the high quality of his technology to his customers on an emotional level. He knows that this grey-metallic colour signals professional, high-quality and also expert automatic vehicle washing, and at the same time looks extremely elegant and yet understated. With this positioning, he is convinced that he will be able to assert himself in the "somewhat saturated car wash market" and offer his customers a visually harmonious and efficient high-tech washing system. "We match the quality of a conveyor tunnel car wash, of course we cannot achieve the speed. Speed was not the most important thing for us. We wanted to wash and cater to vehicles ranging from normal cars to large and high vans, caravans and off-road vehicles. This is now possible." He also says: "Many customers believe that we are a conveyor tunnel car wash because they feel like they are in one, even though it is a gantry system."

This feeling is also conveyed by the pre-washers, who work from 10 a.m. to 6 p.m. directly in front of the entrance to ensure that all vehicles pass under the washing gantry in the best possible pre-cleaned condition. As soon as a customer leaves the brand new wash bay building with their freshly washed and dried vehicle, an employee is on hand to thoroughly dry it with a microfibre cloth in their hand. Werner Cunow has a total of three permanent employees and one temporary worker. The pre-wash service is extremely popular with customers. So good that some of those who – for whatever reason – arrive at the car wash before ten in the morning, come back again after ten. Because the CUNOW CARWASH pre-wash service is not in action before ten in the morning and after six in the evening. Early risers and night owls have to help themselves. An information board next to the entrance to the washing bay explains in an understandable way which actions they need to perform themselves. After all, for the modern WashTec operating terminal with ticket and scanner, it makes no difference whether a pre-washer or the customer himself starts the wash.

The heated wash bay building, which Werner Cunow had planned and built, is brand-new, functional and also worth seeing. The new construction began with the demolition of the old building and the dismantling of the dilapidated system in spring 2017. As early as the August that followed "we had completed all the work," says Werner Cunow. The modern light-filled wash bay "is very popular with our customers." This is due to three large-format pairs of windows along the entire left-hand side of the building, which allow daylight to shine onto the white plastic panels. If natural daylight is not sufficient, Werner Cunow switches on light-intensive LED spotlights, which he had installed in the bay.

The high-performance features of the technology are reflected in washing results with which “the customers and we too are very satisfied." Both sides can also more than agree because the vehicles are washed with chemicals from AUWA. "WashTec technology and AUWA chemicals simply belong together. Offering everything from a single source works better." The new water conditioning system AquaPur2, which WashTec supplied to Nienburg, is also proving to be particularly successful. "There's never been anything like that here before. The compact system works reliably and well. We are very satisfied with the system." Werner Cunow saves expensive fresh water with the AquaPur2. The system manages to recover almost 100 % of the washing water and requires hardly any chemical additives. "Thanks to its great efficiency and high fresh water savings, it will pay for itself very quickly," Werner Cunow is convinced. By the way, everything that went into the ground – piping, tanks, water recovery – is new.

CUNOW CARWASH offers its customers three washing programmes – Prime Wash, Comfort Wash and Basic Wash at prices between 12.90 and 8.90 euros. The underbody wash is an additional option. The price for the van wash  – always with underbody wash  – is five euros more than the price of a standard wash programme. "This is clear and makes the selection easier. It also means that customers know what they are paying at first glance," the experienced operator is convinced.