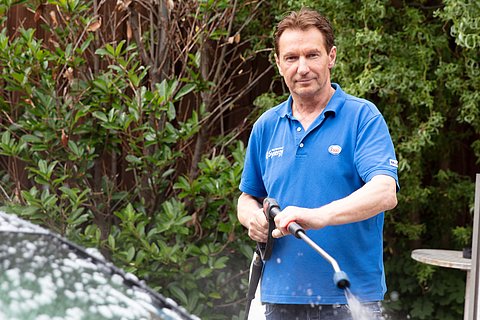 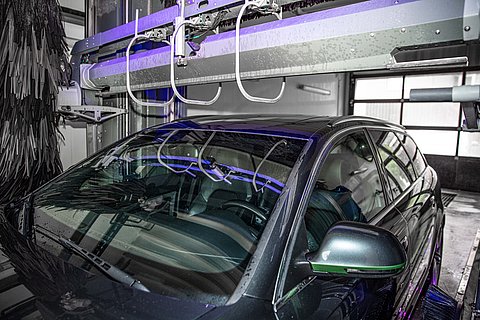 The scenic sights around the municipality of Katlenburg-Lindau are not the only insider tips of the region in the Northeim district of Lower Saxony. The ESSO petrol station in Northeimer Straße 15, leased by Andreas Busch eight years ago, is a top "destination" when cars and vans need to be perfectly washed and cared for. Since February 2021, WashTec's SoftCare Primo has been providing the best performance for optimum cleaning and perfect care of vehicle surfaces in a previously refurbished wash bay – white plastic wall panels and light grey, non-slip flooring surround the EG-designed gantry car wash.

Before Andreas Busch started the petrol station and car wash business – triggered by a "very strange coincidence" – he ran a hotel together with his parents after a successful apprenticeship as a chef. When his interest in working in the catering trade waned, he retrained as a businessman in foreign trade. "I then went on to work in field sales for the Swiss chocolate manufacturer Milka, where I looked after petrol stations. At some point, I learned that the ESSO petrol station here in Katlenburg-Lindau was becoming vacant, applied and became a petrol station tenant 'overnight'." He has never regretted this step, on the contrary. "I am doing so well that I would choose the petrol station business again and again." In the meantime, the conjunctive model has been followed by real facts. "I took over a second ESSO petrol station in Northeim, ten kilometres away, on the first of July 2021."

When Andreas Busch leased the petrol station in October 2013, he was not familiar with the petrol station and car wash industry or car wash and wash chemical manufacturers. Moreover, there was little time for him to prepare between the successful application in September and the petrol station takeover in October. "A colleague in Göttingen, who had already been running a petrol station for a quarter of a century, trained me in a 14-day crash course and also supported me a great deal during the time afterwards." When asked how Andreas Busch came to WashTec, he answers today: "It was the same colleague who contacted WashTec at the time and initiated everything else for me, as I urgently needed a new gantry car wash. The gantry system that was still washing vehicles here at the time was twelve years old and 'worn out'. So I had to get a new, powerful car wash in a hurry. Thanks to the dedicated arrangement of the Göttingen colleague, a new gantry system from the world market leader in car wash systems was in the bay within a very short time after I took over."

Without a risky combination

This WashTec gantry system washed and maintained vehicles extremely reliably for seven and a half years, mainly due to its robustness. "However, I was no longer 100 per cent satisfied with the washing results in early 2021. And since I want my customers to be completely satisfied with every wash, I initially considered just buying new brushes. However, partial investments are often risky. Brand new brushes and older system technology are a combination that I disliked and can potentially turn into an incalculable risk. That's why I decided to buy a new gantry car wash again and, of course, bought it from WashTec again." At the same time, Andreas Busch negotiated with those responsible at ESSO in Hamburg. He succeeded in pushing through the renovation of the wash bay. So now both are new. "I sell cleanliness, so I don't want my customers to drive into a 30-year-old wash bay whose walls and floor are out of date."

"The different coloured backlit foam application was a major highlight at the launch as it was the first gantry car wash of its kind in our region. I saw customers taking photos and filming and also big bright children's eyes." Andreas Busch, ESSO petrol station in Katlenburg-Lindau

Andreas Busch behaved in exactly the right way from a business point of view, because "there are now even more customers than before". The most important reason from the customer's point of view are definitely the selected equipment options of WashTec's SoftCare Primo  – high-pressure wash with flat spray nozzles mounted on the side of the gantry frame, large brush diameters with Flex-Control-System, swivelling roof nozzle for optimal front and especially rear drying as well as underbody wash unit and the innovative WheelJet wheel washer, finally the waxing system. One of the key features of the system is its high washing, care and drying speed, which is above all a business advantage. The short programme run times give it the title of being the fastest car wash in its segment. Andreas Busch also opted for eye-catching lighting effects – flashing LED lights on the guide rails and LED light strips on the horizontal beam of the gantry throughout the washing, care and drying process. The variable lighting patterns of the StarTrack guide rails also make it easier for customers to enter the gantry and position their vehicles correctly.

Technology and chemicals from a single source

For the care of the vehicles, Andreas Busch chose the extremely effective, long-lasting high-gloss foam polish ShineTecs from WashTec subsidiary AUWA. The glossy product with 'repair effect' not only creates a high-beading protective layer on the vehicle surfaces with every wash, but also fills in any unevenness in the paintwork. It is polished in a separate pass.

With a clear conscience, Andreas Busch can rely on the adjustment service and the regular checks by the AUWA representative. His work contributes significantly to achieving perfect washing and care results day after day. Once again, it becomes clear how important it is to perfectly coordinate car wash technology and chemicals, and why it makes more than perfect sense to get both from a single source. After only five months of using the SoftCare Primo, Andreas Busch states that "customer complaints are almost non-existent" and emphasises in this context: "The role model for customers is my own car, which I regularly wash and maintain with ShineTecs. It looks fantastic, even though it's already ten years old." In the meantime, he is thinking out loud for his second petrol station: "I would like to have a new gantry car wash there too. Once I know the precise figures, I will probably and with a clear conscience proceed in the same way as here – refurbish the wash hall, buy a new gantry system from WashTec, use AUWA chemicals."

"I use ShineTecs to protect the gloss and paintwork of the vehicles. It is fabulous. It beads up as if the car had been polished before."
Andreas Busch, ESSO petrol station in Katlenburg-Lindau