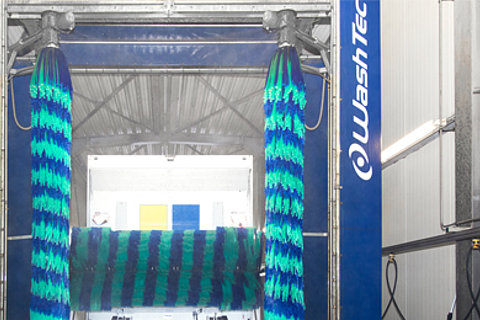 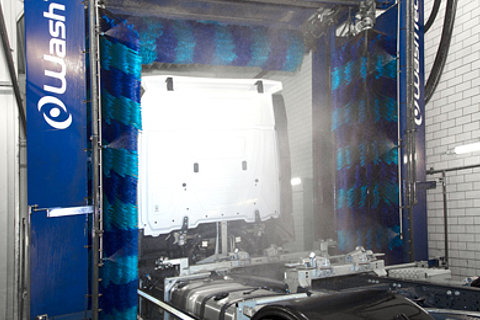 "The company Schreyer's experience in contract washing dates back to 1995", says Robby Schreyer, Managing Director of Schreyer, a medium-sized family business with 91 years of automotive tradition to its name. "As experienced washing contractor, in addition to vehicle servicing and repairs in our Mercedes workshops, we provide an exemplary washing service for vans, trucks and buses, taking care of the washing technology, water conditioning and maintaining the wash bays", he adds looking back over 21 years of commercial vehicle washing. The wide range of professional services provided by the Schreyer Group is also reflected in its certification as a TruckWorks centre – a service brand of Daimler AG that only selected commercial vehicle partners are entitled to carry. Besides going about our everyday business, "we constantly strive to further develop our customer services", says the Managing Director. The focus above all is on daily commitment for the future, a highly trained and reliable team and skilful management. In its endeavours to secure the long-term business success, the company's Ottendorf-Okrilla site, situated in today's economically strong industrial park on the Bergener Ring, was chosen as a location "to build a bay alongside a car dealership and workshop, in which a body repair centre was set up in addition to a commercial vehicle wash", reports Robby Schreyer.

The combination of a car dealership and workshop is without doubt nothing unusual, but definitely is in conjunction with a commercial vehicle wash. "When we set up a Mercedes workshop here back in 1994, the German Post Office (Deutsche Post AG) set up on the opposite side of the road with a large fleet of trucks and vans. Shortly afterwards we were approached by the Post Office asking whether they could fill up and wash their vehicles on our site", he says explaining how he got started in the business of automatic vehicle washing. Back then, the sales managers of WashTec's predecessor California Kleindienst were the contacts who took care of all the planning for the washing technology and water conditioning.

The first system produced and delivered under the new name WashTec for the client "Schreyer" was given factory number 2, since system "Number 1" was installed for tests on the factory site in Augsburg and reserved for the developers. Schreyer concluded a full maintenance contract when purchasing the new system. In "return", Number 2 went on to deliver 15 years of reliable operation in continuous duty and accomplished month after month an average of 250 washes up to 400 washes at peak times. A remarkable achievement thanks to WashTec and workshop staff at the car dealership, who looked after and maintained the washing technology and bay in exemplary fashion. The high-pressure equipment plays the most important role, since it is responsible for cleaning the wall and floor tiles of the 30 metre long and six metre high bay and, if required, also the washing brushes.

"On the occasion of the transport exhibition, the leading international trade fair for logistics, telematics and transport, we bought a new commercial vehicle washing system, a MaxiWash Vario, in early June 2013 in Munich. Prior to this, we gave the wash bay a complete overhaul and replaced for example pipes and high-pressure lances", says Robby Schreyer describing the purchase of the new WashTec system. The system handover in August ran smoothly, and the commissioning went to plan without problems because the WashTec service technicians worked extremely conscientiously and swiftly during the estimated, one-week installation period. "By Friday, the new gantry car wash was already up and running and washing the vehicles of our major customers in the usual reliable way", says the Managing Director.

Although attaching importance to quality as regards material, technology and equipment makes things more expensive when it comes to making the purchase, it pays off over the long term in the washing business. In addition to a robust design and low maintenance, which apply to all systems from WashTec, it is above all the additional equipment features – such as the side high-pressure arch and the intensive high-pressure cleaning – that WashTec offers in the commercial vehicle wash that really get vehicles clean. Schreyer’s major customers are hauliers, transport companies and logistics providers, primarily vehicles from distribution operations, which also include vans, dump trucks, swap bodies and tanker trucks and altogether call for a high degree of manual labour on the part of the service team. All companies which, like Deutsche Post AG in Ottendorf-Okrilla's industrial park, want to and should present their fleets clean at all times in public. Since the vehicles of the respective companies only earn money when they are on the road, the washing speed is naturally very important. WashTec’s MaxiWash Vario completes two full passes in just under seven minutes. Schreyer’s wash customers do however have to allow for a few extra minutes for their trucks to be washed. A pre-washer equipped with a high-pressure spray gun, foam brush and bucket pre-cleans the areas that are either difficult or cannot be reached by the brushes and dries the cab windows and wing mirrors after the wash. By way of example, it takes altogether at least 20 minutes to wash a box truck, for a tank wagon, the washing time is definitely three quarters of an hour.

At the car dealership site in Ottendorf-Okrilla, it is not only commercial vehicles that are washed and cleaned by a MaxiWash Vario. The site also has a car wash with WashTec technology of the type EasyWash.  “In 2014, we renovated this facility and introduced the washing chemicals from WashTec's subsidiary AUWA”, emphasizes the boss. “The business cooperation with the washing chemicals supplier also works to plan.”

2007 saw Schreyer expanding and taking over a Mercedes-Benz service partner for commercial vehicles and buses in the north of Dresden on the river Elbe. Midway through the year, the extensive construction and renovation work got underway in the listed factory building. Since March 2008, the company has been trading under the name “Auto-Schreyer Dresden GmbH” and was successfully certified in the same year for the premium service “BusWorld” – the highest service level for Mercedes-Benz and Setra buses. The premium washing service could now also be offered in Dresden. “We happened to discover last year whilst surveying the market that the truck wash at a truck stop in Dresden had closed. Problems with the operator, machine breakdowns and poor washing quality were stated as the reasons for the closure”, says Robby Schreyer describing the situation on site at that time. “We subsequently got in touch with the mineral oil company that operates a petrol station on this site and in August 2015 were finally awarded the contract to operate the truck wash”, said the pleased and highly interested Managing Director.

Before Dresden’s most modern commercial vehicle wash was opened on 5 October 2015, Schreyer had to invest substantially. “Since the truck wash was in a very poor condition, we gave the building a complete overhaul and replaced the technology.  On account of the performance and reliability of the MaxiWash Vario at the Ottendorf-Okrilla site, we also installed the same WashTec gantry wash in the wash bay at the Dresden truck stop", said Robby Schreyer. After just under 12 month’s operation, he sums up as follows:  “It washes smoothly and achieves quality results.” Knowing just how efficient and reliable WashTec’s technology is, Schreyer opted for the promising motto “Sparkling clean” for the reopening. A motto that speaks for the system manufacturer WashTec and brings in plenty of customers for the contract washer Schreyer.  The Managing Director’s words of praise for WashTec technology are based above all on the perfectly functioning washing technology and pioneering environmental standards. As an example it is possible to cite the water conditioning technology, which ensures that the freshwater consumption is significantly lower compared with previous systems.