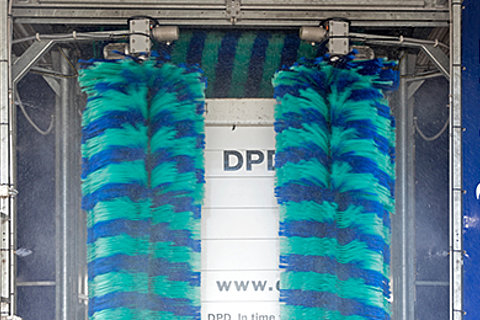 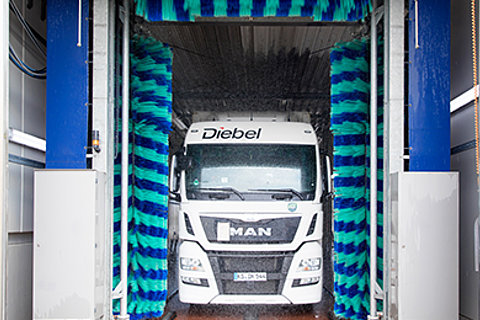 Trucking cleanly through Europe thanks to WashTec

The Diebel haulage company is a trade mark for punctual, efficient and reliable system transport in Europe. "Our fleet today includes 1,600 of our own swap bodies and 300 towing vehicles. When on the road they are all in public view and are expected to perform more than 1,000 transport orders each day in a clean condition", highlights managing director Michael Diebel referring to the external appearance of his fleet. "This was also the reason back in the year 2000 for investing for the first time in its own commercial vehicle wash." Diebel knows exactly what to look out for when heavy (weighing several tons) but extremely powerful tractor units have to be bought. Understandably, he was less aware as to which technical equipment features are necessary however in a modern truck wash in order to clean articulated trains and tautliners efficiently. He thus gathered information from the major wash facility manufacturers before start of the 21st century. He finally made the conscious decision in favour of the globally successful and innovative Augsburg-based company WashTec, since the system technology presented back then convinced the Kassel-based haulier Diebel outright. The fact that his decision back then was absolutely correct has been confirmed by the outstanding cleaning results constantly achieved. Over 15 years, the commercial vehicle gantry wash has cleaned and maintained the entire Diebel fleet extremely reliably 24/7.

Only three days for the installation

Anyone who really knows Diebel, knows that he sees himself as belonging to those businessmen who take the following view: "Once I've made up my mind, I stick with things I have tried and tested." In saying this, he was referring above all to WashTec as a reliable company and its state-of-the-art washing technology. What he actually needed for his system transports operating throughout Europe was "a high automated washing facility, capable of being used 24 hours a day, seven days of the week without breakdowns. A facility that can be easily operated by the drivers and employees on their own. A facility that cleans our vehicles and superstructures with high efficiency."

Those who know that Michael Diebel operates his business confidently and resolutely would hardly have been surprised therefore when, on 17 June 2015, WashTec engineers set about installing a MaxiWash Vario in the 25 metre long, six metre high and six metre wide wash bay at the company headquarters in Kassel. The WashTec specialists were able to commence their installation work right away, because the company had already taken care of dismantling and scrapping the old system itself. Employees had also renovated the wash bay immediately before the system was installed. When the special articulated truck hauled the parts of the almost five metre high gantry with absolute precision into the bay, the walls had already been coated with light, durable epoxy resin. On 19 June 2015, WashTec was already ready to hand over the high-performance, robust and cost-efficient commercial vehicle wash.

"We opted for the modern washing system from WashTec because it can wash automatically. Our drivers can use it on their own from 10 p.m. to 5 a.m.", says Michael Diebel and goes on to explain: "80 percent of our fleet is on the road at night." He also says: "Due to the size of our fleet, the washing system has to be efficient and above all reliable in order to get in particular our 1,600 swap bodies properly clean." After all, it is about presenting the company's image in the best possible light on public roads. "I cannot deny", says Diebel, "that we first had to get used to the new system. One thing that is certain, however, is that the old system's  breakdowns were mainly due to operator errors. Thanks to our uniform fleet and the automation in the new washing system, we expect that these operator errors will no longer occur", explains Michael Diebel looking into the future and adds: "After 12 month's operation, we can say for sure whether or not what we decided in 2015 has been successful."

Opt for a good system

Michael Diebel deliberately did not take out a maintenance contract. "After all, we have opted for a good system", he says assessing the desire for reliable system operation once again in the years ahead. He doesn't see any problems whatsoever with carrying out the maintenance himself. This is also because there is not only the company's own workshop at the Kassel site, but also an employee who is responsible for the entire building services, who carries out daily care and maintenance activities according to instructions in the bay and at the washing gantry. This has created a good environment for continuous operational readiness. What is more, the drivers monitor each wash to ensure that the system is working properly. Managers also check the wash bay and washing technology once a week. In the unlikely event that something should happen, the drivers press the emergency off button immediately. They have been trained so that they can take the gantry back into service according to the check list provided. We would only contact the manufacturer WashTec if, for some reason or other, a major fault had occurred. However, it won't ever come to this. Experienced Diebel rules out technical defects. "We are expecting the system to deliver continuous reliable operation by following the manufacturer's maintenance instructions."

Managing director Michael Diebel can also well imagine the third generation of commercial vehicle wash from WashTec. Particularly if the washing system technology is so innovative that it can wash "the tractor units and bodies in significantly less time, requiring considerably less energy, whilst still achieving the same outstanding cleaning results."