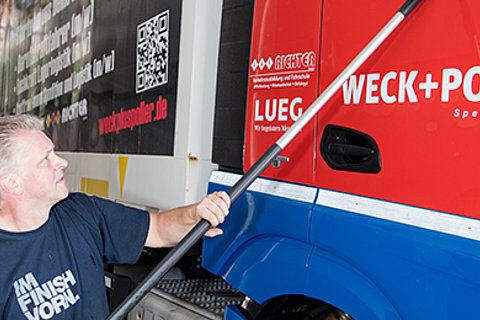 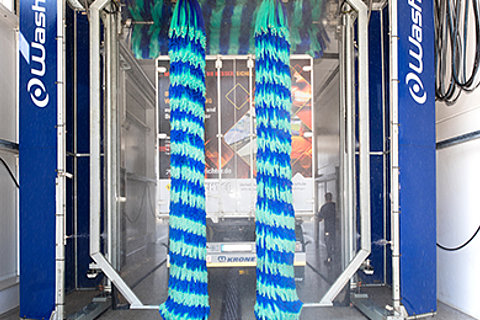 One-stop shop – Weck & Poller is a mobility service provider as a haulier, logistics specialist and service company at eight sites mainly in Saxony. "Our fleet includes 350 modern commercial vehicles from Mercedes of the highest standards", says Lutz Zimmermann, who is responsible for the areas 'Service station' and 'Vehicle maintenance'. That the entire vehicle fleet, which includes for example articulated and jumbo trucks as well as swap bodies and even "Gigaliners", have to be properly cleaned, protected and maintained after going out and before starting out again, is a matter of course for this first-class logistics service provider. After all, every commercial vehicle on the road represents the company to the public.

As the fleet grew against a background of increasing transport orders, the management invested multiple millions at the end of last year in the Zwickau company site in Reichenbacher Straße. A large state-of-the-art 20,000 square metre logistics building and service centre were constructed, which also includes a modern commercial vehicle washing system. A commercial vehicle washing facility, which now also cleans and protects vehicles in Zwickau in addition to the existing modern truck wash in Kirchberg western Saxony as a second automatic washing facility for the transport trucks.
The managers at the innovative company did not have to discuss which washing system manufacturer they would award the contract. "We have been washing with WashTec technology since 2008. During this period, our experiences with predecessor models have been very positive. It was thus only logical to put our trust in WashTec once again", says Lutz Zimmermann explaining the decisive reason. What is more, we already knew the qualities of the Augsburg technology through a WashTec gantry wash, despite this being for "standard" vehicles.  It washes the vehicles on the site of the public service station and wash centre in nearby Kirchberg, whose operators go by the names of Weck & Poller.

The careful and calm Zimmermann is also responsible for the building and technology of the commercial vehicle wash at the company headquarters in Zwickau. He checks the stopping position of the trucks driving in and pre-washes them very thoroughly himself. Prior to starting the washing programme specific to the particular vehicle type at the operator terminal from the technology room, he climbs up into each cab, folds in the wing mirrors and checks once again during another tour around the tractor unit and trailer that the vehicle combination is ready for washing.

On a sunny Friday in May, he finally presses the start button for the company's own, 450 bhp driving school truck. This truck is also just under one year old and features a great deal of technical equipment so as to provide all learner truck drivers with comprehensive and targeted training. WashTec's operator terminal is also unerring, since the service engineers have stored all the washing programmes for all the vehicle models in the system. "Since the letters in the display are also clearly visible in daylight, I cannot only see exactly all the information for all the variants. It is almost impossible for me to press the wrong button."

Summer 2015 marked the start of project 'Commercial vehicle wash' in Zwickau. "An employee from WashTec came to us and presented washing technology, equipment options and the advantages of a state-of-the-art commercial vehicle wash", says Lutz Zimmermann who can still remember it well. Once decided that a MaxiWash Vario with a pre-rinsing high-pressure arch and mirror bypassing would be installed on the haulier's yard, "the man from WashTec took care of all the other details concerning the wash, such as building permits and permissions relating to water law", adds Zimmermann. He also emphasizes: "The predecessor gantry did not feature automatic pre-cleaning. This equipment feature has made the manual pre-cleaning much easier for us." The fact that this also shortened the washing time noticeably and considerably more transport vehicles can be washed proved a welcome side benefit.

Installing the gantry and the water conditioning system took about a fortnight in December – slightly longer than is normally required for such installations. "The reason for this was", according to the system boss, "that the water recovery system had to be moved slightly." An additional outlay, but which has paid off however, since "everything has worked perfectly" since the opening in February 2016.

The delivery of the almost five metre high gantry was something you don't see everyday. For the customer Weck & Poller, however, it presented an extremely cost-effective solution. "It made sense for us to fetch the new gantry ourselves from Augsburg", confesses Lutz Zimmermann. Today, he is the man for all seasons, who conscientiously ensures that not only the washing technology, but also the wash bay is cleaned at regular intervals. The spray deflectors of both side brushes help keep much of wash water from the bay walls, but not every drop. "The shorter the cleaning intervals, the easier it is to remove the dirt. The work is also significantly less strenuous." He only has to restrict this work to a minimum on Fridays. This because "Friday is the busiest day of the week, since this when most of our fleet returns to the yard. I then have to get a move on so as not to exceed the 20 minute time slot per vehicle to complete a full wash."