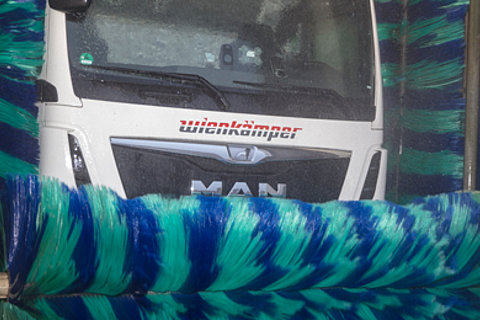 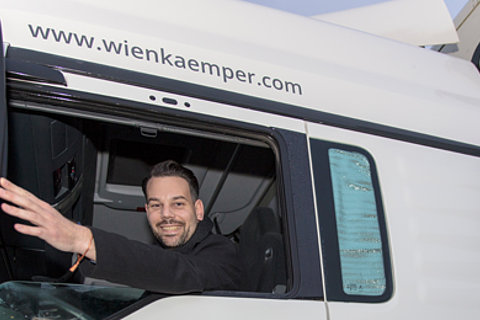 The 90-year-old logistics service company Wienkämper transports goods mainly in Germany and in some neighbouring countries as part of its regular and system transport services as well as free transport services. The owner-managed family business operates a modern fleet of over 100 trucks and around 600 swap bodies. A long-established company which, amongst other things, attaches great importance to offering its drivers not only permanent employment with prospects, but also modern working conditions directly behind the wheel. Driver assistance systems, adaptive cruise control or emergency brake assistants are just as much a part of the equipment of every truck as comfort extras – stationary air conditioners, comfort beds, ventilated seats. When Torben Rusch, who now belongs to the company's trio of managing directors, was looking for a job after coming out of the army in 2006, he found it at W. Wienkämper GmbH. "But I didn't always want to stay a driver and so I continued my education. When my boss at that time Ingo Wienkämper came up to me and said that he intended to expand the business office and asked me if I wanted to strengthen their team, I agreed," he says describing how he started his career. Today, Torben Rusch is managing director and shareholder and directs major European transport operations for DPD, night transport operations and bulk customer collections at the 20,000 square metre site in Melle-Gesmold near Osnabrück.

In 2012, the management decided to buy a commercial vehicle wash for the truck fleet. Up to that point, drivers were washing tractor units and bridges themselves and less and less, as the tour network became ever denser and they simply didn't have time to wash the vehicles. Some time before opting for an automatic vehicle washing facility, a Saturday valeting service cleaned the vehicles. However, finding and hiring dedicated people to wash trucks on a part-time basis on Saturdays in all weathers was not easy. "We were very annoyed that the trucks left the yard more or less dirty," says Torben Rusch. "So we finally inquired about producers of washing systems for commercial vehicles and quickly came across two major manufacturers. We had both of them make us an offer. WashTec was awarded the contract initially because the price they offered was a tick cheaper. In addition, we soon realised that WashTec was the better solution for us." A situation that was no longer in keeping with the times for drivers instantly changed into a convenient washing service. An articulated truck is cleaned from front to back in just seven minutes. All you have to do is press the button on the plain text display terminal.

W. Wienkämper GmbH moved into its current commercial premises in the immediate vicinity of one of the largest DPD bases in Germany in 2008. Even then, there was a wash bay building that was used by the drivers for their manual pre-wash and main wash and in which a WashTec gantry wash for commercial vehicles took over vehicle washing operations in October 2012. "When the winter of 2012 was over and spring began, we again discussed what would be necessary to have a MaxiWash Vario installed. The preparations included, for example, determining a suitable place for the technology, separating its space from the workshop and setting it up accordingly – water conditioning, electrics, electronics. The managers of Wienkämper and the WashTec specialists worked exceptionally well together in this phase. They worked so well together that all the preparatory work could be planned very precisely and carried out quickly to ensure that everything was ready when the system arrived. "We had done everything necessary on the day of delivery so that the final assembly could begin as planned. Torben Rusch still remembers two particularly major challenges well – the installation of the huge gravel filter weighing tons for the washing water and the riveting of both rails for the almost five metre high gantry construction. "The fitters then erected the gantry itself within two days. The management of W. Wienkämper GmbH deliberately decided on a basic version of the gantry as a robust and reliable solution. A system that washes thoroughly and harmonises well with the chemicals. "It is amazing how reliably and effectively it performs its tasks and has hardly ever failed, even though it washes day and night. It's hard to believe it's already five and a half years old."

Safely through the winter

Torben Rusch sees another reason for the apparent untiring agility and great reliability of the system in the fact that the drivers take great care to ensure that the truck wash is used and operated really carefully by everyone. "We are very pleased about this, as our staff have realised just how great an advantage such a system can be for them and how relaxed vehicle washing can be". It is estimated that drivers set the MaxiWash Vario in motion 30 times in 24 hours, which equates to around 10,800 washes per calendar year. "The system is definitely worthwhile when you know that a contract washer will charge between 35 and 70 euros for cleaning one vehicle. However, washing operations have to be halted in freezing temperatures, since the bay is not heated. Even if it were, "it wouldn't be a good idea for the vehicles that are washed in the morning on returning from their trips and parked in the yard. If a driver were then to try to open the cab door for a short haul four hours later, he wouldn't succeed because it would have frozen in the meantime." For this reason, the system is drained before the frost period. "We installed our own system for this purpose, which makes it possible to blow out the system completely with air. This allows us to drain not only the pipes, but also the nozzles. Water-free nozzles no longer freeze". The gantry construction is even moved away from the gates to protect it against frost and stationed in the middle of the bay. "This is how it survives the frosty period."

Downtimes are not an option

Those responsible at Wienkämper decided not to conclude a full maintenance contract with WashTec, but instead agreed to an annual service. "We have noticed that it is sufficient for a technician to visit us once or twice a year. I am glad that I have a very good, technically skilled workshop manager in my team, who quickly became familiar with gantry technology. He takes care of maintenance and minor repairs himself. Nevertheless, WashTec remains an extremely fair business partner and sends the spare parts we request by post. The workshop manager then takes advantage of the quiet washing period to get everything shipshape. The truck wash must not be out of action for long, otherwise we'd have a riot on our hands."

The managing director has other good things to report about WashTec. "Basically, WashTec is very well positioned. The employees I know always make an effort to be friendly. The technician who always comes to us knows the entire system inside out. He is very friendly and courteous at all times, always has an open ear for our questions and is always ready to help". The Wienkämpers also receive valuable tips from him from time to time. "If that's the case, then do it like this and if this is the case, then do it like that. Things always work out this way. This is really great, just brilliant. Five years later, despite some differences of opinion, I feel confident when I say: I would choose WashTec again if the gantry ever needs replacing. That's also a good sign."