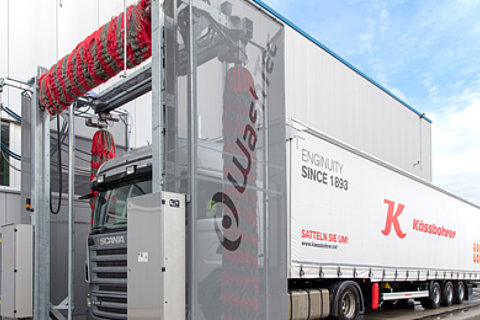 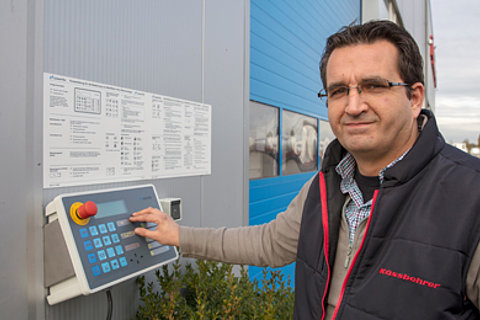 Kässbohrer, Europe's leading manufacturer of semi-trailers of all kinds, builds for customers around the world chassis, curtainsiders and platform mega-trailers, container chassis, swap bodies, refrigerated boxes, tank and silo semi-trailers, low-loaders and special semi-trailers as well as tippers – a total of over 800 product variants. "Kässbohrer Fahrzeugwerke GmbH was founded by Karl Kässbohrer in Ulm in 1893 and is one of the fastest growing semi-trailer manufacturers in Europe today – if the trailer brands Talson and Tirsan are added to the Tirsan Group. The production site here in Goch was established in 1998. Starting with the production of curtainsiders, we began by building tanker and silo vehicles in 2001 and in 2003 we extended our product range with the Talson box semi-trailers. Last year, we opened our second southern German site in Achstetten, south of Ulm, where Karl Heinrich Kässbohrer founded the company in his day. We are now not only back in the founding region, but also able to complete almost the entire semi-trailer portfolio in the final assembly stage," reports plant manager Manfred Görtz. The long-established company has four manufacturing sites on three continents. In addition to its sites in Goch, Ulm and Russia, the city of Tula, south of Moscow, the site in Turkey with a total area of 365,000 square metres is Kässbohrer's largest manufacturing facility. It is here that the complete semi-trailers and special bodies are built before they begin their journey to Goch.

"The curtainsiders, for example, are loaded on top of each other and brought to Goch with all their parts well packed. Our employees then fit the body and attach the curtain sides and prepare the semi-trailers for sale. The customers collect them with their tractor units on the agreed date," says Manfred Görtz.

First through the wash

Kässbohrer Fahrzeugwerke GmbH in Goch, a town in North Rhine-Westphalia on the Lower Rhine near the Dutch border, operates an open-air commercial vehicle wash on its 100,000 square metre production site next to the 10,000 square metre assembly bay. The brand new wash facility is from WashTec, the world leader in vehicle washing. Since entering service, the nearly five-meter-high gantry has taken over the task of thoroughly but gently washing the incoming semi-trailers after their long journey from Istanbul by ship to the Italian port of Trieste, by train through Switzerland and finally either from there directly or already from Italy by road. "Vehicles that stand here for a few days on our company premises waiting to be collected by the client will, of course, go through the WashTec washing gantry once more. Every customer gets a freshly washed, sparkling clean product," emphasises the experienced and service-oriented Manfred Görtz.

He describes the good reasons why he chose washing technology from WashTec as follows: "I wrote to several manufacturers. WashTec suggested in an initial response that I should look at a commercial vehicle wash as a reference at a wholesale company. During the joint on-site viewing, we quickly and easily came to an agreement. The constructive as well as informative and trusting dialogue with WashTec's sales representative Thomas Bolz not only contributed to this, but formed the decisive basis for it. He subsequently looked after us very professionally. Thus, we did everything right." – Kässbohrer took its decision for WashTec technology in the spring of 2017, the commercial vehicle wash was officially opened in the autumn of 2017. And on the question of why they opted for a commercial vehicle in the open air, Manfred Görtz replies "initially for cost reasons. Furthermore, the site did not lend itself to building a new bay with all the necessary connections, water conditioning and separator systems in a relatively short time to suit the dimensions of the MaxiWash Vario. And finally we wanted to 'start' generously." In the end, WashTec's giant found a place on a 40 m concrete track, which was declared to be ideally suited due to its location directly on one side of the assembly bay. Short distances to power and water connections, space for the water conditioning plant and chemical container storage close-by, frost protection, because the assembly bay is heated and the desired positioning of the control terminal made the decision for the 'place of operation' an attractive solution also for investment and business reasons. For the equipment of the MaxiWash Vario "we prepared a small specification sheet, in which we noted what the system must be able to do. Thomas Bolz used this information to prepare the WashTec offer."

Fountain spectacle for the underbody

Equipping the gantry with high-pressure units, for example, helps to achieve the excellent cleaning results. In addition to the side high pressure and the powerful but gentle and contour-tracking roof and side brush cleaning, the gantry is characterised in particular by the performance of the underbody wash, which not only delivers a remarkably powerful water spray with interesting parallel jets in a double row from the nozzles, but which can remove the dirt and grime that gets stuck to the underbodies and the chassis of the semi-trailers on their long transfer across Europe. Nevertheless, the control still needs a little fine-tuning. "Every customer no doubt has their own very special requests, no one system is like the other," surmises Manfred Görtz.

As an open-air system, it is equipped with an automatically triggering frost protection mechanism and is thus designed to switch off as soon as the outside temperatures fall below two to three degrees plus. "The system then automatically de-ices itself with the blower. We are currently still in talks with the aim of running the underbody wash at even lower temperatures, because at these temperatures, it drains immediately after every wash and cannot freeze up." Were this to be possible and "we could also use the wash facility at zero to one degree, this would mean a tremendous increase in the quality of the delivery condition of the vehicles in the winter season.

"In order to install the 'equipment', which ensures the proper operation of the MaxiWash Vario even in the periods close to freezing, in heated rooms, we decided to go as close as possible to the assembly bay. Doing so saved us having a separate heating system." – An important stage for the assembly of the open-air commercial vehicle wash was the concept design and realisation of the floor plate. "For this, we worked with a company from the Netherlands, which optimally implemented our requirements and worked to our specifications. On completion of their preparatory work, the washing gantry in Augsburg had been manufactured to the point where it could be installed a week later. These works all ran exceptionally smoothly.  The delivery of the system by the haulier commissioned by WashTec, as well as the unloading, installation and connection of the gantry also went to perfectly plan. "Five fitters worked almost simultaneously to complete the entire installation process in just over a week, without encountering any significant problems."

AUWA chemicals in use

The best helpers for excellent washing results are the highly efficient wash chemical products from WashTec subsidiary AUWA – for semi-trailers the proven PreLavan Truck and PreLavan Truck LF products. They are the additives for the water, which remove all dirt from the vehicle surfaces despite economical dosage. Right from the start, Manfred Görtz praises the care chemicals that are sprayed in the final stage of the wash and allow the water to run off the surfaces well. He is optimistic about the successful washing results, because technology and chemicals for the wash come from the same source. To date, the combination of chemicals and technology has delivered really good washing results and economical washing. "The system is designed so that we can reuse up to 90% of the service water. As a result, the proportion of fresh water is only one tenth. The total calculations show extremely economical results on paper at first, and most definitely soon in practice.

The maintenance and care of the facility should also be economically viable. The company plans for example to accept the existing maintenance offer from WashTec. To ensure reliable and breakdown-free washing operation, "we already had several employees instructed in the operation of the system. The clearly designed terminal and the logically structured operator steps facilitate the training. Thorsten Warzecha, production manager and planning specialist in Goch, is the main person responsible for ensuring proper washing procedures. We will be training other employees who are also able to refill consumables." The robust components of the MaxiWash Vario are already convincing thanks to their low maintenance and, if they fail at all, their low breakdown rate. The developers also designed the system in such a way that it should and will "live" for a long time. In Goch, the facility now has to prove its efficiency and reliability in daily operation from half seven to half four. "We're still thinking about keeping it open for longer especially on Fridays, or even washing on Saturdays. But we first have to clarify this organisationally."

Kässbohrer plans to commission another commercial vehicle wash at its second site in southern Germany. After the global economic crisis in 2009, which also affected the transport and logistics industry, vehicle production has picked up speed again in recent years. But first, Manfred Görtz and Thorsten Warzecha want to gain experience with the first MaxiWash Vario. How long, however, the period of gaining experience will be, is down to the management at Kässbohrer. To date, people have only talked about it, no decision has been taken yet. "However, once a decision has been taken, it will be implemented quickly at Kässbohrer." The fact that once again talk of a WashTec gantry is "in the air" remains speculation. Many practical examples of other clients in the past, however, underscore the motto – once WashTec, always WashTec.