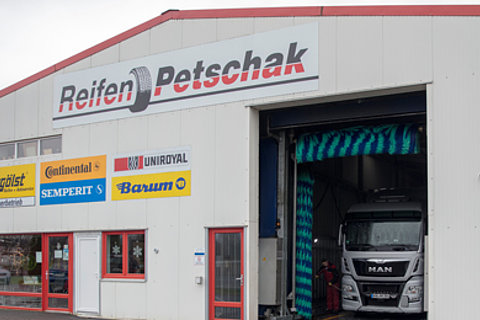 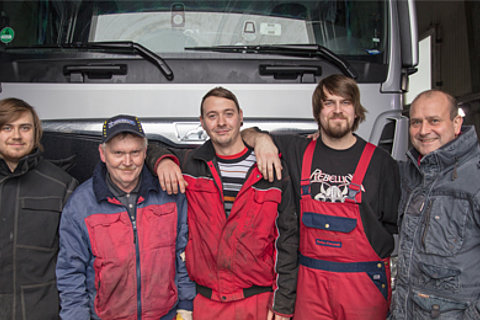 When asked if what is now a major professional vulcanising workshop and vehicle wash station go together, Uwe Petschak, Managing Director of Reifen Petschak in Thuringia's Berka on the river Werra, answered "yes, of course". The three pillars of the service provider's business in the region have long been well known – tyre trade, specialist vulcanising and vehicle washing services. Uwe Petschak followed in the footsteps of his father Rolf, who in 1989 considered setting up a tyre business on a private plot and started up in his garage in 1990. "From its small beginnings, the tyre business continued to develop and the orders increased. I also joined when my father asked me to help him in his business." A short time later, the father and son decided to start up in the car wash business as well. The private plot in Hausbreitenbach was large enough to have a gantry for car washing and a second gantry for washing trucks and vans.

He came to Berka/Werra, the current location of his company and situated only two kilometres from the garage premises, rather by accident. "I enquired at a large haulier's in the Berka industrial estate if I was allowed to wash their trucks. The haulier agreed. We'll agree on that, handshake and deal done." There are no business guarantees when the tyre professional had a commercial vehicle wash installed on the opposite side of the road. Next to the commercial vehicle wash, Uwe Petschak set up an office container and also started the commercial vehicle wash business at the new site. "I washed trucks of every kind and size for two years, especially the trucks from the haulier."  The tyre specialist and car wash operator developed his business continuously and so well that it grew into a thriving family business. The Petschaks – his wife and both sons also joined the tyre and car wash business – were helped by the fact that there were very few truck washing facilities in the region. "The haulier, who is my most important customer today, had to drive quite a way in the past to get his vehicles washed. Over time it became an unwarranted expense for the haulier," he says knowing and citing the decisive reason. The short journey by the haulage trucks to Uwe Petschak's commercial vehicle wash just across the road and his excellent vehicle washing service brought him around 50 trucks in one go – most of them articulated lorries – equipped as curtain siders and swap bodies – as well as trucks with and without trailers.

After the first two years, Uwe Petschak has a large industrial building constructed on his 10,000 square metre commercial property, under which he sets up a commercial vehicle wash, a tyre fitting bay, a small showroom and, directly above, the business office. The range of products includes various makes of branded tyres, vehicle batteries for cars and trucks, windscreen wipers and car wheels of all types and sizes. The site is large enough to subsequently set up a small car wash centre in 2011 and to have a gantry system put up for this purpose and to install two self-service car wash booths. Presented in this way and supported by word of mouth, his customer base is growing very fast for both commercial vehicle and car washing services. "Most customers who use the commercial vehicle wash come from our business park and the immediate vicinity. However, we also count 10 to 15 percent passing trade from out of town. These are companies that bring their deliveries to customers in the Wartburg district.

For three years now we have been washing with the standard version of WashTec's commercial vehicle washing gantry MaxiWash Vario. This was because in 2012, the old commercial vehicle washing gantry was so worn out after about ten years of operation that the extent of repairs required was simply too great. "Irrespective of this, the facility had been temperamental during its years of operation and often broke down. So I said to myself, I have to try a different system to realistically compare performance and operating costs. Before changing manufacturer, Uwe Petschak visited the commercial vehicle trade fair to see the WashTec gantry close up. The WashTec sales consultants show him the MaxiWash Vario and its equipment options. The idea of a robust and reliable material and technical solution for high washing quality grows in the mind of the tyre dealer. A gantry that manages two complete wash passes in less than seven minutes. A gantry whose side brushes, thanks to double bearings, can maintain uniform contact pressure at the top and bottom, thus delivering even better cleaning performance over the entire surface. And a gantry whose brush position is detected electronically without contact, thus enabling the brushes to track the contours of vehicles and clean effectively even in problem areas.

"We could not imagine at first that it would become a washing facility for trucks," says Uwe Petschak remembering the day when a low-loader carrying the individual parts rolled into the yard. "After two days things looked different." The initial inspection was followed by three years of reliable washing with results, "which are simply better than the competitor model. The systems are similar to each other, the gantry from the competition seems to me in a direct comparison a little more robust, but is more prone to breaking down."

It won't work without a hand wash

Without stopping and with a great deal of effort, one full-time employee and one additional helper on Thursdays and Fridays who take care of the pre-washing create the conditions for optimal cleaning performance. "Because what a machine does – no matter which make – is not enough for a good truck wash. That's why it won't work without a hand wash." For example, they both wash down all the drivers cabs extremely thoroughly, scrub the drivers entrances and exits, take care of the problem areas between cab and trailer, go over the wheels of the tractor unit and semitrailer a number of times with the foam brush. Even the smooth surfaces of the curtain sides get a hand wash using a long-handled washing brush before the employee is allowed to start the MaxiWash Vario. Because the more conscientiously they carry out their pre-cleaning work, the more convincing the washing result for semitrailer tractors, swap bodies, flatbed trucks and vans. The manual pre-wash takes place without exception in the bay. That is why the overall washing time is longer. "I would prefer it if the pre-wash and machine could run at the same time." But to do so, the bay would have to be significantly extended.

Enough space remained for the water conditioning and osmosis plant. The conditioning of the washing water saves considerable amounts of fresh water. The osmosis system ensures that "we can rinse the vehicles with decalcified water. This means there are no white spots on the dried surfaces." The eco-friendly actions of Uwe Petschak also help reduce the operating costs of his commercial vehicle wash and save money.

"We always wash the vehicles with unheated water." However, Uwe Petschak heats the wash bay with a diesel unit when "we have freezing temperatures", even though the warmed-up air quickly escapes through the large gates. "We could wash down to minus ten degrees. Only it is not recommended, because the water freezes on the curtain sides, as we found out after our experiments. All year round, however, we have to make sure that there is not so much washing water on the curtain sides to prevent it from being thrown off when the trucks drive out of the bay and leave the site for the road." While the wash is in progress, coffee and boiled sausages are available at the Petschak's – a catering service during the approximately half-hour washing time, which goes down well. The washing time for dump trucks and tanker trucks is up to one hour. "A waste incinerator is located nearby. When the vehicles are empty, the drivers come to us and have the cabin rinsed out and the vehicle washed." As such, WashTec's MaxiWash Vario in Berka/Werra proves itself to be a reliable and trustworthy multi-washing talent. "The customers," says Uwe Petschak finally, "are certainly very satisfied and keep coming back."