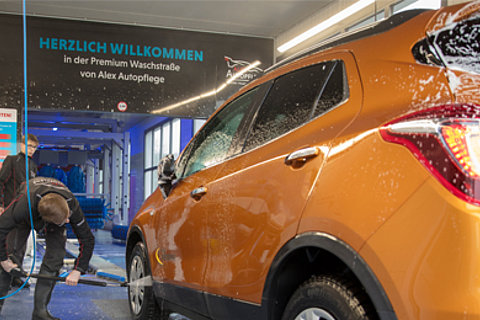 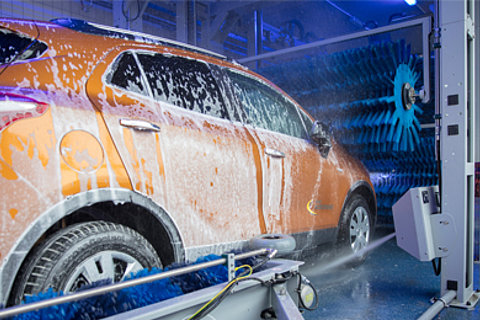 The company "Alex Autopflege" not only gets customers' vehicles into shape, but looking great. The owner Alexander Uting accurately formulates his high-performance trio – prepare, polish and paint. We are talking about a "passionate professional vehicle preparation service", as the headline reads in his editorial in the "ALEX HAUSZEITUNG", November 2017 issue. "Alex Autopflege" offers an all-round carefree package for new and used cars as an innovative centre for vehicle care and preparation, car glass repair and replacement, professional rim preparation as well as wrapping technology for paintwork and glass. This is in keeping with the new opening of a building for vehicle preparation and painting as well as the premiere of one of the most modern car washes in the Sauerland at the beginning of November 2017 – the latest generation of innovative car wash technology from WashTec in Augsburg. "We provide all cosmetic services on vehicles including car glass repairs and replacement work, whether private, commercial or car dealership. Everyone who comes to us receives our one-stop service for their vehicles," says Alexander Uting, describing the essence of his service, which he has been providing with the highest level of professionalism for the past 15 years.

As an apprentice automotive mechanic, he visited the Automechanika trade fair in Frankfurt am Main to find out more about the latest technology in the self-service car wash sector. Back in the Sauerland from the trade fair metropolis, business ideas began to emerge. "I came to the conclusion that the washing and preparation of vehicles was just the thing for me." In 2003, when he started his own business whilst still a part-time apprentice, the then 23-year-old began to prepare and maintain vehicles from nearby car dealerships. He was helped by the fact that he was learning in Franz-Josef Voss' car dealership in Schmallenberg, where he worked as an assistant after successfully gaining his qualification and that his boss supported him to the best of his ability. Amongst the biggest start-up difficulties were his negotiations with the bank, which he – although still an apprentice – conducted successfully. Alexander Uting found a plot of land in the Schmallenberg business park "Auf der Lake", which he needed to get started, and on which he had three self-service wash booths and two vacuum stations installed and connected up. For the preparation and care of vehicles, he used an existing building.

From lone wolf to regional employer

When he finally opened his business in 2007, things rapidly took off. "People were very happy with my car washing as well as my preparation and care services - preparation, polishing and interior valeting." This is how his business got off the ground and his first year in business initially as a lone wolf before taking on his first employees in 2008. In the same year, Alexander Uting changes his employment status from part-time to full-time self-employment. "In 2009, the first major car dealerships approached us for our vehicle care and preparation services."  Thus, step by step, we consciously broadened our range of services – spot and smart repair, dent repair technology, partial and full repainting. The order situation developed so well that the "Alex Autopflege" team grew to six employees in 2012.

"In the same year I looked into offering an automatic vehicle wash and finally opted to have a gantry car wash installed. Even back then, I went for WashTec technology. Thomas Bolz, sales representative at WashTec, got involved and recommended a high-performance gantry car wash." Unlike his competitors in the immediate vicinity, Alexander Uting offered automatic car washing with a manual pre-wash and wiped down the vehicles afterwards by hand with a leather cloth. In addition to the vehicle care and preparation, he also gained valuable experience in the automatic vehicle washing business. "The operation of a car wash centre with wash booths from a different manufacturer, whose concept and system technology I was quite sure about at the time, commenced in 2011 and led to communicative difficulties that annoyed me. So I looked for other manufacturers in the market and came to a clear decision in favour of WashTec."

With the gantry car wash designed for 800 washes, he even managed 1,500 washes a month. However, some customers "sometimes waited up to an hour for their wash, while others drove straight off." Alex Uting was also bugged by the fact that he could have washed even more vehicles, and that he was losing sales. "So we put our thinking caps on and ventured a further step – something bigger and faster." This led him to thinking about the idea of merging the wash, care and preparation along with all the other services. "We started looking for a piece of land again and found it again "Auf der Lake"", where a builder's yard once sold building materials and which went bankrupt years ago". It was precisely this plot that Alexander Uting developed together with the operators of a neighbouring car dealership, which sells vehicles from Volkswagen, Audi and Skoda, according to "my ideas and those of my wife, Lilija Uting, who today does all the work in the administration office. The business cooperation between the neighbouring car dealership and us was also a good move."

Vario concept was awarded his contract

The idea of a larger and faster car wash led to on-site visits across Germany. "I started by searching for car wash centres on the Internet, which received positive reviews from their customers, drove there and inspected a total of nearly 50 washes using this method." Alexander Uting also visited the Uniti expo in Stuttgart, made the journey once again to Frankfurt for the Automechanika trade show in order to realise his vision of a perfect car wash facility on the 2,000 square metre site back home. After talking to Thomas Bolz, who presented himself as a highly technical WashTec sales representative, Alexander Uting knew precisely from which manufacturer he would be ordering the technology modules for his new conveyor tunnel system. Modules were selected that characterise the Vario concept of the SoftLine2 system and create experiences with washing results – the high-pressure pre-wash module from WashTec, the foam pre-wash FoamSensation featuring backlighting with alternating colours, longitudinal wheel and sill washer, oscillating spot spray nozzle high pressure for the sill and side areas of vehicles under the first roof brush, brush station with linear technology and electronic brush in-feed, gentle SofTecs® material, fleecy textile brushes in the care station, blower drying – powerful, efficient and energy-saving, finishing with an extremely gentle textile final drying cycle through the rotating cloth dryer, stainless steel information column and the LED countdown traffic light to ensure that customers exit the wash bay in an orderly fashion.

First WashTec, then the architect

In contrast to many other car wash operators, Alexander Uting first chose the technology and then had a solid brick-built wash bay building constructed to fit its dimensions. "I did not want a steel framework building with sandwich cladding for the wash bay, care, preparation and paint shop. We thought about cladding the inside of the wash bay with plastic, because with the gantry system I had found that a lot of water, chemicals and moisture together caused the steel to rust very quickly, leading it to rot, and it just looks bad. "He abandoned the idea of plastic panelling and opted for high-quality white wall tiles that were applied to the professionally plastered walls. "We first wanted to install plastic panels. The problem here was that they only stick with zero percent residual moisture. This was the manufacturer's specification for the provision of warranty claims. There is no such thing as zero percent residual moisture in the plaster. And the floor was given an epoxy coating," Alexander Uting reports on the materials used in the building's interior lining. Windows are fitted on the side facing the street that let in light and allow inquisitive customers and children peek inside. "Light was important to me because it makes the conveyor tunnel system bright. There are also people who feel scared and claustrophobic about being in a tunnel. And who don't feel as bad because of the windows. Customers can also watch the wash in progress inside. Some days you can't even get close to the windows."

AUWA chemicals, what else?

"We use AUWA chemicals to wash and care for vehicles. Needless to say, I also gave this matter a lot of thought beforehand as well. In particular, I contacted a colleague at the Kamener Kreuz motorway intersection who had been operating a WashTec system with AUWA chemicals for two years. I even visited him a number of times, the first two occasions as a naive customer and without revealing myself. It always smelt so fresh and pleasant there, and the washing results were brilliant. Consequently, I also decided to start with washing and care products from AUWA." Alexander Uting was helped with his decision regarding chemical products by the fact that he tested the products of every chemicals supplier on the car wash market in the gantry car wash and also in the self-service wash facilities. The same also applied to the chemicals used for the water conditioning. This was because the water in Schmallenberg is quite soft, so he always had to deal with water conditioning problems affecting the gantry car wash. "I simply wanted to avoid an identical situation with the conveyor tunnel system. Above all, he has the water conditioning under control because the washing water from the manual pre-wash and the automatic wash run into separate containers. "That's how we prevent the water from the main wash from mixing with pre-wash water – a result of many experiences I've had over the years. I open a separate pipe that leads directly into the separator when the bay is cleaned. I close the pipe for water conditioning with a plug and open the one that leads directly to the separator. This way, I prevent the mixture of water and bay cleaner from getting into the water conditioning system."

WashTec and AUWA key to the success

In spite of steady and healthy business development in recent years, with a high proportion of word of mouth, Alexander Uting relies on eye-catching marketing on site. This includes messages on the windowless side of the building, which wash customers read when they drive towards the entrance of the wash bay via the pre-wash station, or have to wait a while due to the large flow of customers. On the right side of the entrance, they can observe preparation and paintwork in progress through large-format window panes. "Wednesday is service day!" announces a flyer in glove box format: "We'll drive through the car wash for you" it says below and mentions three great advantages – free coffee during the wash, "The best" washing programme and turnkey return. Customers pay 11 euros instead of 15.50 euros and can take advantage of an express internal valeting for only 24 euros. "I've always had my vision in car care and preparation, and I knew exactly what I wanted to do to provide my customers with a decent service and to work cost-effectively," says the competent owner of "Alex Autopflege". This also includes his wise choice of WashTec and AUWA.