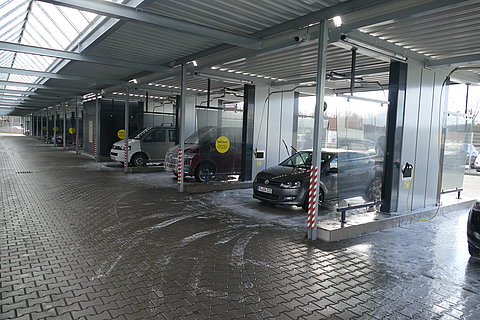 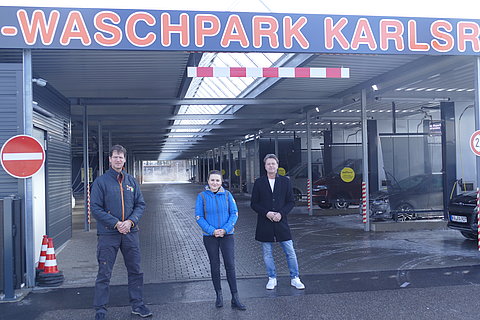 It is a top-class self-service car wash centre that WashTec has built for EFA petrol stations. 14 wash booths and 16 vacuum cleaner stations are available to customers on 4,500 square metres at Wolfartsweierer Strasse 46 in Karlsruhe. "Here we now offer you one of the largest and most innovative self-service car wash centres in southern Germany," touts Rudi App, operator of the EFA petrol station, which was named 'Petrol Station of the Year' back in 2018. EFA was founded in 1973 by Emil Fahrer, from whose initials the company name is derived. Today, his son Wolfgang Fahrer and his granddaughter Sina Fahrer run the company. The Fahrer family, above all Wolfgang Fahrer, are committed to innovative strategies and, if convinced, to their rapid implementation.

The company opened its first EFA wash centre in Ettlingen as far back as early 2010. The new centre in Karlsruhe has now been in operation since August 2020. The remarkably large self-service car wash was built with Maike Fahrer, Sina Fahrer's younger sister, as project manager. She was also in charge of all public relations. Back in 2016, an EFA/bft petrol station opened on the former railway site, with WashTec's then latest gantry car wash, the Softcare² Pro XL. It was at this time that the idea arose to build another self-service facility on the large site, Maike Fahrer explains.

"Wolfgang Fahrer's idea was to build a completely covered car wash centre so that customers could clean their vehicles in the dry," recalls Ralph Benz, who has been working for the company as a service technician since 1993. The trained power system electronics engineer is technical manager and service technician all in one.

He also sees the close cooperation with WashTec on the project as very important. The location analysis was carried out with the then WashTec area manager Achim Schneider. Today, his successor Christian Schmid carefully looks after the company. Since there was no large self-service car wash facility in the immediate area, the location was almost predestined for the project. "Investment decisions are always a mix of the helpful tool of location analysis and confidence in one's own company," Rudi App knows. "We looked at two sites in advance," adds Technical Manager Ralph Benz, "at WashTec we knew from experience that it would work well." Then the construction phase began.

"In July 2020, the time had come to start pilot operations and in August 2020, we celebrated the opening," Rudi App reports. "We advertised very extensively for the launch of the self-service car wash centre." Among other things, there was a limited bonus card where the credit was doubled for all card top-ups. For example, with a top-up of 50 euros, customers received a credit balance of 100 euros. "A film about the car wash centre was also made for the opening, which we use to advertise on social media," says Maike Fahrer. "We also do radio advertising and advertise on public transport."

In addition, the company offers the EFA wash card for the car wash centre. They are advertised on Facebook and on displays at the car wash and at the neighbouring petrol station. "So customers will be made aware of the self-service wash bonus scheme when they fill up and can buy the card directly in the shop," says Ralph Benz. Of course, you can also pay with cash and debit cards on site, and there are two coin changing machines. And anyone who wants to pay for their car wash with a credit card can do so at the petrol station, making the self-service facility attractive to business customers as well.

The centre is open all year round on weekdays from seven to 9 pm. Washing programmes include: Soaking with power foam, high-pressure washing with intensive cleaner, washing and gloss care with foam brush and spotless rinsing with osmosis with beading effect. Compressed air is also available free of charge for interior cleaning at the 16 vacuum cleaner stations, which are controlled via a central extraction system. Floor mats can be conveniently cleaned in the WashTec mat cleaning units. The cleanliness of the facility is taken care of daily by a colleague who looks after things and also helps with any questions. If technical details are required, service technician Ralph Benz can be contacted at any time.

Ralph Benz has observed that the clientele includes commercial customers as well as young professional washers who prefer to wash their favourite vehicles with a bucket and sponge on Saturdays. But older customers also use the facility; usually a little uncertain at first, but that quickly passes. "The informative labels on the equipment explain everything very well. Every step is explained in detail," says Maike Fahrer. According to Rudi App's estimates, 60 per cent are regular customers, and his goal is to significantly increase this number. "Our catchment area extends 30 to 40 kilometres around Karlsruhe," says Rudi App, "and since the site is very spacious, it is equally attractive for motorhome and caravan owners. They can manoeuvre effortlessly on the site, also thanks to the 2.90-metre height.

"Auwa supplies the washing chemicals," Ralph Benz informs us, "they are tuned to the equipment and the customers are very satisfied with the washing results. In addition, the Auwa representative comes by regularly and checks the settings. Nevertheless, says Rudi App, you can't stop some customers from bringing their own products. The technical manager also attributes the good washing quality to the fact that the facility works with immense water pressure. By investing in very good technology, fresh water consumption is lower than expected. 17 litres per minute are used at a wash booth for one euro. The minimum price is two euros.

Ralph Benz reveals further plans for the future: "There are also plans to install a solar power system. The roofing is already structurally designed for this. This will allow the car wash centre to be operated with the energy generated and to reduce energy costs. According to our calculations, we are aiming to go from 13,000 euros to 3,000 euros in energy costs. If we make a surplus, we will use it to run the petrol station."