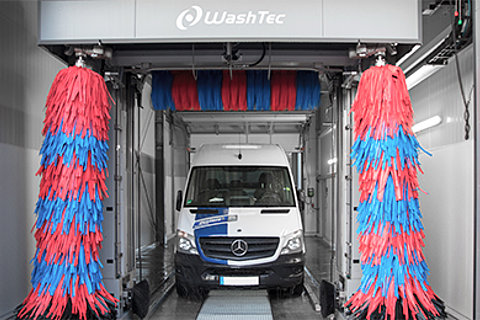 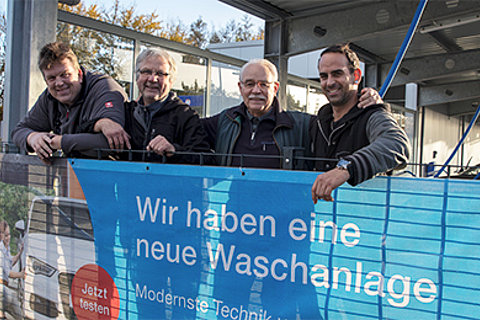 The history of the Isselhorst car wash centre just outside Gütersloh is fascinating, for which the now 80-year-old operator Wilhelm Koop chooses clear and thoughtful words. In March 2017, he opened a state-of-the-art, visually impressive car wash centre on a site of around 10,000 square metres. The idea goes back years. The Isselhorster Garden Centre occupied the site for its business until it closed in 2003. Since then it has remained unused. In the immediate vicinity, a Shell petrol station sells fuels, shop items and today car wash programmes for a gantry car wash. The station, which is fully leased to the oil company, belongs to the Koop family of car dealers. Wilhelm Koop thus had to experience at close quarters how the weather gradually took its toll on the former garden centre over the years and finally made everything unusable. A situation, which the skilled master mechanic and capable businessman Wilhelm Koop did not want to and could not watch idly any longer after more than ten years. The Koop family finally decided to buy the land in order to set up a modern, future-oriented service for the washing and care of cars, vans and mobile homes. The necessary demolition of the old garden centre began in the summer of 2014. The approval procedures were complex, slow and protracted. The reason: "There could be a flood area here. If one believes the responsible experts, due to rising ocean levels, water levels could rise 84 meters above sea level in 100 years. Water that comes to us from the surrounding rivers, which then also rise, and would put the car wash centre under water. We initially planned the wash park for 20 years. By then, I will have just turned hundred and the predicted flood would still be eighty years away." For the future building owner, the Koop family, it was not really clear until August 2016 that the project, costing almost three million euros, could actually go ahead. "Car wash operations commenced in March 2017 and since then we've seenthe business grow month by month."
"The most important thing that spoke for the car wash centre site is my petrol station on the neighbouring property. The station was founded by a family known to us as early as 1927. Our family took it over later and continued the business," Wilhelm Koop looks back. "We have now completely handed over the petrol station business to Shell," says Wilhelm Koop. "The petrol station is therefore a decisive factor for the profitability of the new car wash centre because many customers fill up there and I give them the opportunity to decide where they want to have their car washed – in the gantry car wash of the petrol station or in the car wash centre. We do not take sales away from each other, but complement each other. The car wash customer at the petrol station is a different one anyway."

The car wash centre is a sight to behold and is one of the most modern facilities in the region. A SoftLine2 conveyor tunnel system, two self-service wash booths and directly next to them an open-air washing bay, for which Wilhelm Koop also had a bridge pedestal built. Anyone who washes the roof of caravans and vans from up there not only sees what they are doing, but also washes the vehicle surface much more comfortably, since the high-pressure lance does not have to be worked over head. A van gantry wash that can wash vehicles up to 2.90 metres high and a total of 22 vacuum cleaners complement the customer service offering. While 18 vacuum stations are under cover and can only be accessed by customers of the conveyor tunnel system, who vacuum their vehicles here free of charge, Wilhelm Koop offers a chargeable service for users of the gantry and self-service car wash facilities at four WashTec vacuum stations in the open air.
"Anyone who has been in the business for a good four and a half decades and offers car washing as a service knows for sure what is involved and what is actually needed for it. For example, it is extremely important to get the rims really clean. This requires a very good manual and automatic pre-wash. Modern high-pressure equipment is required. That's the most important thing. I think we did well here, too."

Wilhelm Koop also managed to foster a 46 year business relationship with the Augsburg-based car wash manufacturer. When he set up independently in the automotive service sector in 1972, he began automatic vehicle washing in the same year. Cleaning and maintenance were carried out by gantry car washes from Kleindienst, Wesumat, California Rohé and last but not least WashTec. "I was very satisfied with the washing results over the years and worked successfully with the sales representative responsible for my patch." Irrespective of this, he made his decision as to which technology he would now order for the washing, care and water conditioning at the Isselhorst car wash centre, very conscientiously and not from his desk. Wilhelm Koop visited other stations where car washes are successfully operated. His travels went according to plan, as he asked the Augsburg company before starting out where WashTec service technicians had already established good reference systems. "I talked with the operators on site, asked about their practical experience." The meticulous businessman Koop researched very thoroughly to avoid mistakes. "I must have looked at about ten car washes very carefully, driving around not only in the immediate neighbourhood, but also as far as Hanover, Bremen, Hamburg and the Ruhr area. This is an effort that every car wash operator should make before deciding whether to build a new car wash or renovate an existing one, because such a tour provides a wealth of useful information from the real world of operating car washes. Important information that makes it possible to draw good and intelligent conclusions for the construction of your own new car wash centre and, in particular, which helps to avoid major mistakes. It is equally important to choose an architect who has already planned and built at least one car wash. I had the processes in my head and knew exactly what I wanted and how," recommends Wilhelm Koop to colleagues.

Only the very best WashTec technology

So he decided to choose top-class modular technology for the SoftLine2 conveyor tunnel system – WashTec's powerful high-pressure pre-wash module for the pre-wash area, a high 2.40 x 2.40 metre high-quality entrance gantry in the "Waschpark Isselhorst" look, foam arch, longitudinal wheel and sill washers with two and a half metre long brush rollers, side high pressure with oscillating powerful BPS spot spray nozzles, high-pressure underbody washing, brush stations with linear technology, care station, contour-tracking and linearly travelling blower dryers, textile roller dryer station and revolving cloth dryer. The result of every car wash satisfies even the most demanding customers when their vehicles gleam, for example, in the afternoon sun and leave the conveyor tunnel system with shiny paintwork. This also applies to gleaming rims and wheels that have just been transported through the car wash tunnel on a wide and flat plastic conveyor belt.
Self-service customers use two flat-roof JetWash stations with Wash & Shine SelfTecs concept and an open-air washing station with a high boom arm for convenient self-service washing of caravans and high vans. He opted for a second wash bay in which he had a silver-grey SoftCare Pro Classic gantry installed. It is possible to wash vehicles up to 2.90 metres high and 2.58 metres wide. The wash bay received a spacious pre-washing area, which was set up as a self-service area. Customers who wish to pre-clean their vehicles here use tokens that can be purchased at the pay desk to the conveyor tunnel system. A WashTec operating terminal with code at the end of the pre-wash station sets the red-blue SofTecs® wash brushes of the gantry system in rotation. Customers with vans are given the opportunity here to wash and maintain their vehicles faster and thus probably also more economically.

Look before you leap

"We planned all the modules and the location of the devices meticulously together with WashTec. At the beginning of 2017, things got serious. The basic installation took a good four weeks, here and there the technology had to be tweaked and the dosing pumps had to be adjusted differently – this is not unusual. At the beginning of March the time had come. There were no teething problems," says Wilhelm Koop, praising the entire WashTec staff, the entire WashTec operations team and its service technicians, who explained the functionality of all the equipment and systems to the car wash centre team in a precise and comprehensible manner during the handover. "Since my team is made up of experienced car wash employees and who admittedly know their way around, there were no problems at all. Above all, because WashTec technology is logically designed and predominantly self-explanatory."
The regular care and maintenance of the systems must also function properly. Four permanent employees and two temporary workers take care of this according to fixed schedules and their friendly and professional washing service for all customers. Meinhard Ewers is the station manager at Isselhorst car wash centre. He is familiar with WashTec technology from stations where he has already worked as operations manager. The man has everything under control, including basic and daily maintenance cleaning, looking after the technology, ordering and refilling washing chemicals and water conditioning. "Our business is cleaning cars. For this reason, we must ensure that the entire car wash centre is clean. When I enter the car wash centre in the morning, everything must be clean. The cleaning work can start the evening before," Wilhelm Koop explains.

Customer complaints do occur, but remain the exception thanks to the perfectly functioning washing and care technology. One reason for this is the use of AUWA's powerful and gentle cleaning chemicals, which at the same time offer the vehicles long-lasting protection. The cause of individual complaints lies neither in the washing technology nor in the chemicals, but is usually the fault of the customer themselves. If, for example, tree resin residues is allowed to stick to the paintwork surface for a longer period of time, cleaning it in a car wash simply will not work. The best washing technology does not produce new cars, nor other desired miracles during cleaning. Even the most modern and powerful washing modules will eventually come up against their limits. "We then offer the customer a paintwork preparation service. Meanwhile, the vehicle is thoroughly cleaned, polished and preserved step by step by hand, so that the most stubborn dirt is removed from the paintwork. We have the know-how to ultimately satisfy the customer."
"Looking back on the past year at the car wash centre, I can say with a clear conscience that I was and am very satisfied with WashTec and AUWA. Our good working relationship would not go back all these decades if I hadn't been satisfied again and again. The sales representative, who was my contact person for many years, also played a large part in this. We had a very good exchange, discussed worthwhile approaches and practices. He is proud of what he has created "out in the countryside" without actually expressing it. Instead, he says: "In the meantime, I have had many visitors – car wash operators and also employees from WashTec's competitors. They take a very close look at the buildings, how we have used the space and the technology installed in the car wash centre, but do not explicitly introduce themselves officially when they talk to me. Well, if there was nothing to see, they would certainly stay well away," says Wilhelm Koop.