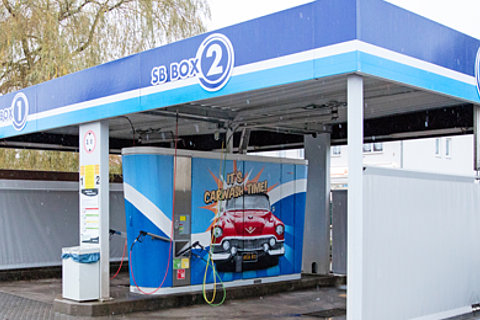 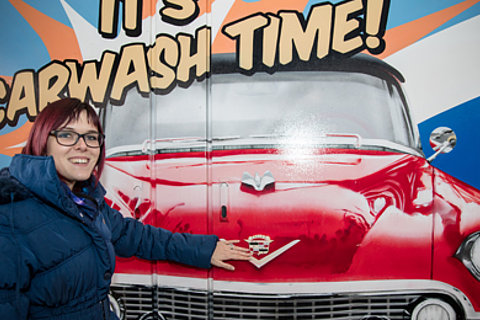 "My name is Daniela Bachmann", says the 29-year-old Thuringian, who took over the Avia service station in Schweina in October 2013, as she starts to tell a story you wouldn't normally associate with refuelling or a car wash business. Accordingly, the task involved offering services geared to the already extremely keen motor racing region – quality fuels for active motorsport racers and motorsports fans on the one hand, special cleaning and care offers for their "stylish cars" on the other.

"From the outset, our motto was refuelling must be made into an event." Many ideas emerged, the best of which she put into practice. "Cars are my hobby", she says pointing out her special relationship with cars. However, her self-service car wash centre is something truly unique and exceptional. The reason: The once snow-white cabinet doors of the self-service washing stations were given an artistic makeover in November 2015 that doesn't exist in this form anywhere else in the world. The freelance artist Christian Hoschka from Bad Liebenstein, owner of the LebenART studio, created two beautiful works of art on both sides using only spray cans. "We worked together on coming up with the design for the content of the pictures. We discussed matters at length, for what seemed ages to me." They depict stylish red cars, reminiscent of the legendary historic Route 66 against a blue background – pictures that "simply go with us", says Daniela Bachmann giving her accurate description. On her Facebook page you can even read… "it now looks as good as it washes".

Only the best for self-service car wash customers

At the time of her taking over the business, it was clear that both the automatic and self-service equipment not only looked dated, but sooner or later would have to be replaced. "For the self-service wash centre, it was clear from the start as to which washing technology I wanted and which manufacturer was to supply it. Nevertheless, I still visited the Uniti expo 2014 in Stuttgart and the 2015 Tankstelle & Mittelstand trade fair in Münster to acquaint myself with the state of the art and latest trends in washing technology. After that I never stopped reading." Her aim was to offer the very best for her customers who wash by hand. One feature she opted for was consequently power foam. A fantastic decision, which she sums up highly contentedly today as follows: "Power foam is simply awesome!" Even during the initial planning of the equipment with Heiko Blochberger, area sales manager for system engineering at WashTec, she was in no doubt at all that her aim was to stand out from the competition in terms of performance and visual appearance. However, the finances had to fit, too. "As I was setting up a new business, I received a start-up business loan." This finally led her to conclude a purchase agreement with Augsburg-based WashTec for a cabinet system with power foam, SelfTecs concept and new colour codes for foam brush and lances, which supplies two wash booths. A system that allows customers to enjoy convenient handling in all the programme steps and which ultimately delivers excellent cleaning and care results. A system whose convincing washing results are more than praised by customers, because they are truly satisfied with the use of AUWA chemicals. A system which, thanks to osmosis technology, leaves cars spotless after drying. A system that ensures the operator enjoys cost efficient running at all times. And a system whose technology is clearly laid out, which does not break down and "whose operation compared with my predecessor – also a system from WashTec – has been tremendously improved."

By concluding a full maintenance agreement, she went the whole way in terms of service for her customers. "I haven't a clue when it comes to this. This is why I have put the technical maintenance in good hands." However, it is her and her team who take care of cleaning the self-service technology and booths, which they do very conscientiously. This also includes the daily maintenance of the cabinet interior. Its maintenance is quite exceptional. "Once a month, we apply wax to the cabinet doors. When doing this, we use the waxes that are normally applied to car paintwork. This is a highly effective means of keeping dirt off the doors and protecting the surfaces.

Unlike the petrol station and gantry car wash, the self-service wash is always open. Vandalism is not an issue and any incorrect use of the technology is soon clarified amongst the customers themselves. "If anyone is not using the facility properly, customers talk to them straight away. It is amazing to see how keen they are to help each other so that the facility does not get damaged."

The new car wash rolled up on the back of a truck completely in white to its place of installation, just a few days after the removal of the old one in October. The installation work progressed so well that it had been completed just three days later. With the premiere of the 'Lady in White', whose silver operator terminal resembles a wedding ring, she commenced regular operation at the start of the weekend on Saturday, 31 October 2015, at 8.00 a.m. To attract lots of people to the booths from the very start, Daniela Bachmann used her Facebook account to launch a photo challenge "Power Foam". She promised to post photos of people using the self-service washing booths, showing their vehicles covered in foam. The overwhelming response showed that this was a brilliant idea. Since then, the self-service car wash has been attracting customers not only from Schweina and the surrounding area, but even – astoundingly – from Switzerland.

However, things really take off at the car wash centre – just as spring is in the air – when she stages a grand opening in April. "Petrol station and stylish cars, season opening with food, drinks & music". This is a car meeting combined with a promotional car wash event. It involves getting together in a cosy atmosphere to enjoy a light bite and a few beverages as well as the chance for petrol heads to talk cars. "The meetings have now become a real cult venue, and never fail to attract superb cars."

Things get even busier for her when the ADAC Glasbachrennen race is on in summer. This is when the formula 1 of hill climb racing convenes in Steinbach. This is just 'around the corner from us'. And also particularly since "we work very closely together with Audi-Club Altensteiner Oberland. I also sponsor the rally team Schmidt und Gesell Motorsport. Marcus Gesell's team takes part in the Glasbachrennen race every year." Both racing teams actively support the spring meetings at Avia petrol station Bachmann. All the events are also always a tremendous success for WashTec's self-service washing technology, which is then constantly in use. Daniela Bachmann is also present as a sponsor of the youth football squad and at the meeting of the BMW Club Regionalteam Thüringen to distinguish herself from the competition and to attract customers to her self-service wash centre. By the way, "it looks so good when the people wipe their cars dry after using the self-service car wash. I think it's just fantastic. Thank you, WashTec!