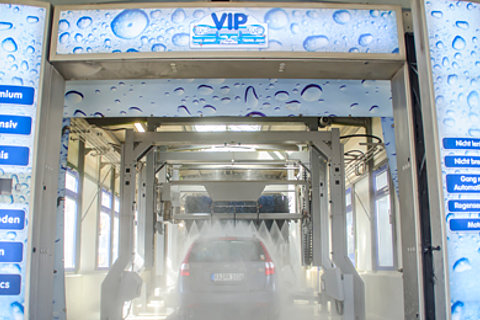 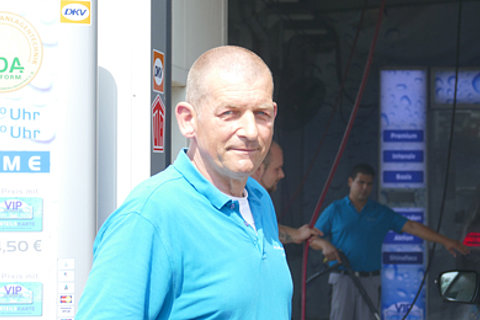 If you head for the VIP car wash salon in the Rastatter Auto-Service-Park "Untere Wiesen", you do not have to look far for the boss. Ralph Kinze is standing directly at the entrance to the car wash and is just taking payment from a customer. Two other employees are cleaning the vehicle in front with the high-pressure lance. The native of North Rhine-Westphalia has been operating the car wash in Rastatt, Baden, since 1997. His family had already gained initial experience with car washes in Dortmund and Herten.

Kinze has leased the 600 square metre site in the industrial park in Rastatt. Car service companies and the TÜV Technical Control Board are located in the immediate vicinity. Originally he only planned to lease the facility. But he was unlucky with the first leaser. One day, according to Kinze, he had locked the doors and simply upped and left. After this, he decided to operate the facility himself, whilst his father continued to operate the facility in Dortmund. His catchment area extends with a radius of 15 kilometres as far as Karlsruhe and Baden-Baden. Rastatt itself has about 49,000 inhabitants. Initially, he continued washing cars with the existing system (a WS 50), after all, it was the first in Rastatt with textile material. This was followed by the conversion to a WS 100 SoftLine conveyor tunnel system from WashTec and a canopy was put in. Two years ago, the system was ten years old by then, the car wash was converted again and a vacuum cleaner canopy was added.

During the conversion, the 47-metre-long building was completely gutted and the SoftLine Vario conveyor tunnel system was installed. The chain was extended to 36 metres. The conversion work took about five months. Car wash operation resumed with new basin technology from 3A Wassertechnik and a new gravel filtration plant from Nais. Thanks to the water conditioning, the system requires just under 38 litres of fresh water per vehicle. The operator is impressed by the quality of the service water. This is always ensured by the permanent filter process and the regular disposal of the accumulating filter residues. For the basic wash with a customer card, Ralph Kinze charges €8.50, without a customer card €9. Vacuuming for interior cleaning is free in the VIP car wash salon. There is no check as to whether or not a customer has had their car washed. He can get over the few 'black sheep' who exploit this.

He has been working with WashTec for more than 30 years, "and nobody can persuade me otherwise. I've seen a lot of products, but I'm convinced of WashTec." And as a confirmation, he adds: "After all, this system has been running completely trouble-free for two years." He is equally enthusiastic about Auwa, whose products he also uses. "On the one hand, it's easier to have everything in one place, and on the other hand, I do not want to have to piece things together, but I want everything from a single source," he says. Prior to this, he had used numerous chemical providers. But he wants to avoid the situation where, in case of problems, one supplier shifts the blame to the other.

After visiting the "World of Carwash" in Augsburg, the operator has decided to use ShineTecs. "What Auwa is offering at the moment is sensational to my mind, both ShineTecs and the new wax ShieldTecs," explains Kinze. "I got to see ShieldTecs at the UNITI expo this year and also learned a lot about it from the field service. I'm already convinced of ShieldTecs and always rely on premium products, making the price a secondary consideration. I have no benefits from using cheap chemicals. When I introduced ShineTecs to my car wash, I did not raise the price initially, preferring to first see how customers responded to it." Customers asked him about the wash, what he had done to their cars. The response has been overwhelmingly positive. Especially when the customers noticed that after four weeks of rain, the water still rolled off the paintwork. "I always get positive feedback from my regular customers," he says. "I am at my car wash every day during opening times, helping out with the washing. I spend twelve hours a day here, or as long as it takes. In addition, I speak regularly with my clients, I regard personal interaction as vitally important." "People talk with each other", says Kinze. And if a car has not come out clean, he then makes a quick decision and the customer goes through the car wash again.

Manual Pre-Washing with the High-Pressure Lance is a must

He employs two permanent staff and five temporary workers. Although many today swear by express car washing, Kinze believes that a human eye still sees more than any robot. And many of his customers also see it that way and who also come to his car wash because they know that an employee still carries out the pre-wash with the high-pressure lance. With express car washes, he has found that often there is still an employee who quickly goes around the car with the brush to wipe over the number plate or other sensitive places. In addition, Kinze does not like the large amount of chemicals used in express car washing. This makes it difficult to comply with the values prescribed by the German Association of the Automotive Industry (VDA). And the quality mark "VDA-compliant car wash", which the VIP car wash salon in Rastatt has carried since November 2016, is important to him. "Because I just want to show to the outside that I allow my business to be properly checked by control procedures. In case of damage, I want to be able to prove that my car wash is checked," he explains. He also regards regular maintenance by the manufacturer WashTec as necessary. For which purpose, the car wash is closed even for two days. "I had a case where a customer reversed into the blower. First of all, the surveyor wanted to see the maintenance documents. I regard it as absolutely necessary to be able to produce these," he says. The cleaning of the car wash is carried out daily by Kinze and his employees on their own using AUWA products. For this purpose, the bay has been specially coated with an industrial floor covering, which is certified according to the Water Resources Act. The floor, says Kinze, can be easily cleaned with a water squeegee. "After all, cleaning also preserves the value of the car wash," says the operator. The car wash is open from Monday to Friday from 8 am to 7 pm and Saturdays from 8 am to 6 pm. His busiest days at the car wash are Friday, Saturday and Monday.

Increased sales thanks to the card business

He does not open the car wash on Sundays, believing that this does not bring in additional revenue and produces rather a shift in sales. For him, it is more important that his employees actively sell car washes, rather than just hold out their hand and take cash. "In addition, I do a new promotion every two weeks for four weeks, which I also advertise on Facebook," he says. Kinze feels that the acceptance of fleet cards like the DKV card also increases the number of customers. Although he has to pay DKV and UTA their contribution, in his words, it does pay off. Many who come with their company car and are satisfied also bring their private cars to be washed. Initially, he was also sceptical about taking Girocard, but now he is very open towards customers paying by card. 25 to 30 percent of the washes go via Girocard. With this amount, it is certainly worthwhile him and his staff standing at the entrance to the car wash collecting payments with a wireless card machine. "That works very smoothly," sums up the operator. Incidentally, paying by mobile phone is the next trend.