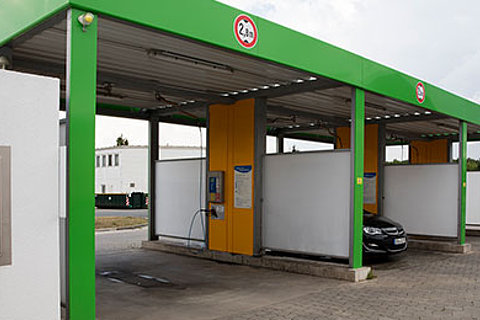 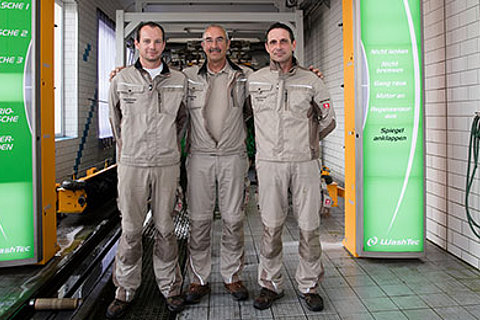 Anyone who talks about Waschcenter Eichler in Sangerhausen, a town between Harz and Kyffhäuser, tells the impressive story of a man, who thinks like and acted like an entrepreneur when an opportunity arose. “In 1999, I received an offer to buy two existing gantry car washes in Sangerhausen. An offer that I owed to my wife, who was working as an independent businesswoman at that time”, begins Frank Eichler. Back then, he was out of work, but not restless or even at a loss. At that time, “no doubt also because of my age, I had little chance of finding employment or a job with promising career prospects, since the rate of unemployment in and around Sangerhausen was very high”, he remembers well. The offer was followed by the purchase of two operating gantry car washes. He initially leased the site on which the gantries stood for three years. Frank Eichler then decided to buy the associated site because he wanted to be sure that car wash customers would be able to access his gantry car washes indefinitely without any problems. “I wanted to avoid having to give up the washing business due to the site being sold by the then owner and ending up possibly having to put the gantries in the garden.” Even during his time as a gantry car wash operator, WashTec and Frank Eichler enjoyed a good, mutually beneficial business partnership, since the gantry car washes were made by Wesumat. Systems which, after reunification, were the first automatic vehicle washes in Sangerhausen’s town history and which, up to the time of them changing hands, had already been cleaning and caring for vehicles reliably for some nine years.

Idea with a difference

The site on which the Wesumat gantry car washes stood was bordered by an undeveloped piece of land. Frank Eichler knew the owner, who suggested to him setting up a self-service wash centre on the site. “That won’t work”, said Eichler rejecting the idea. However, he could’t forget the undeveloped piece of land. The idea then finally came to him in 2010 to also buy the adjacent plot and to use this for setting up a modern conveyor tunnel system, self-service booths and vacuum cleaner stations. He thus proposed buying the site from the site owner known to him. However, Eichler attached the purchase to the condition of getting the financing approved for the planned wash centre.  The negotiations with several banks regarding the investment of around one million were extremely tough. When the financing was however eventually approved by a bank, the Eichler family bought its second site and could  – finally – start the construction of the conveyor tunnel system. There was no discussion about which manufacturer was to supply the washing technology. The reason was obvious. In his previous business years as a successful gantry car wash operator, Frank Eichler had not only bought two successor gantries from WashTec in 2003 and 2007, but had also enjoyed an efficient and successful working relationship with the sales rep Heiko Blochberger.

In contrast to typical installations, it wasn't the bay dimensions that determined as to which and how many technology segments were installed in line in the conveyor tunnel system, but Frank Eichler himself. His ideas about which modules were necessary and what was practically achievable at the site were matched up with each other with the design support of the experienced WashTec consultants. Six large windows on the left-hand side of the building are meant to allow plenty of light into the tunnel. The wall on the right tiled from floor to ceiling conceals the water conditioning system, washing chemicals, sanitary facilities and changing room lockers for employees. While Frank Eichler was setting up the manager’s office opposite the pre-wash station at the entrance to the conveyor tunnel system, he planned a small snack bar at the exit. This idea has not yet been realised because “I fear that the washing centre will not only be used for washing vehicles on sunny weekends. I can well imagine that people will be getting their folding chairs out of the boots of their cars and having parties. I don’t want this to happen.”

While 2012 was spent planning the wash centre, the building work commenced in early 2013 ready for the installation of the 34 m long conveyor tunnel bay in line with the system dimensions and technical necessities. The installation specialists from WashTec finally installed the modular SoftLine2 conveyor tunnel system in the autumn of 2013. A system that delivers perfect washing results particularly since it has been jointly designed above all with consideration and foresight on the basis of the extensive practical experience of Frank Eichler and the WashTec consultants. A modular system whose components include, for example, a stationary high-pressure arch, underbody wash and a wheel sill washer with high-pressure nozzles that ensure enhanced wheel cleaning results. A system with a brush station for washing, whose brushes travel in a linear path. A system that comprises a chemical protection arch, blower dryer and rotating cloth dryer. The modern, automatic high-speed door at the exit to the conveyor tunnel system is also according to plan, and protects both the facility and employees against the wind and adverse weather. A generously proportioned pre-wash station, which has been integrated into the wash bay building, also helps to protect against bad weather.

Fully tuned after a week

After the fitters had finished tightening the last bolt on the system, it took about a week to fine-tune the system to deliver excellent washing results. "No major problems were encountered anyhow, just the odd teething problem at most", says Frank Eichler looking back.
New features for those customers who do not take their vehicles through the conveyor tunnel system, and also for Frank Eichler, were the self-service washing stations. The wash centre offers customers the service of a three-station rack system which enables them to clean and care for their vehicles themselves. The technology container with the necessary units for operation does not share the order of the washing booths. Frank Eichler had it positioned on the front of the row of booths. The container also houses the WashTec coin changer, where customers purchase the necessary tokens. Those customers who only have large notes on them are requested to change them at the entrance to the conveyor tunnel system. The underfloor-heated self-service washing booths offer the traditional programmes – intensive pre-cleaning, high pressure, active foam, spot-free rinsing, wax care and high-gloss rinsing. So as to avoid any discussion about marks with drivers who wash their cars themselves, particularly owners of dark vehicles, he opted for an osmosis system. A wise decision, since the water in Sangerhausen is very hard.

Eichler is a man for clear talking, comprehensible structures and unambiguous information. This is reflected towards customers for example in an extremely streamlined washing programme structure. "We have three washing programmes and deliberately wanted to keep the number as low as possible." Following a thorough market survey prior to opening the wash centre, Frank Eichler found that many colleagues have a long list at the entrance, which takes too long to work through and ultimately leaves customers not knowing what is the best option to choose. "I wanted to keep things clear and simple for customers. In addition, I also opted for moderate washing prices."

His customers are first and foremost regulars, who have had their vehicles washed in the gantry car washes for many years. Loyal corporate customers from the neighbouring industrial park, the site of the former Sangerhäuser machine factory, businesspeople and town residents as well as motorists from the surrounding area. This is because there are no direct competitors. "They are all too far away", says Frank Eichler. Nevertheless, "we tried very hard to find new customers in the start-up phase. For example, we had 3,000 grand opening flyers inserted in a Sunday edition of the local Wochenspiegel newspaper. This proved a tremendous flop." The Eichler team had considerably greater success in motivating customers with the loyalty card, which gives customers a free wash after ten washes, and the reliable WashTec technology as the basis for successful car washing. "The stamp on the loyalty card is important. Customers know this."

A lot from one source

The entire Eichler team keeps the wash centre in perfect condition for its customers. Frank Eichler did not take out a service contract with WashTec for the conveyor tunnel system technology because this "demanding task has been taken over reliably by his son." Felix Eichler is responsible for servicing and maintaining the conveyor tunnel system according to the manufacturer's directions, thereby preserving the technology, shine and colour. The uniform colour concept of the technology throughout the conveyor tunnel system, a bright green-yellow-orange ensemble, is continued on the columns and fascias, the vacuum cleaners and information pylon. The opening times are however different. Whereas the self-service booths are open daily from 6 a.m. to 10 p.m. (except on public holidays), the opening times of the conveyor tunnel system are structured on the basis of weekdays, and is open for example on working days from 8.00 a.m. to 7.00 p.m.  "Opening the wash centre precisely this way was based on personal experience I have gained over the past few years", says the boss of the car wash centre, who also chose the opening times according to the time of year.

Customers like the fact that Frank Eichler always keeps his promises. They also like the workwear. Trendy, sandy overalls for the boss and employees and safety shoes add a professional touch. "We chose suitable workwear together from catalogues. This makes us look smart." The results and experience also match up. There are hardly any complaints. And "we haven't had any technical problems with the facility in the two and a half years it has been running", says satisfied Frank Eichler expressing his gratitude to WashTec.