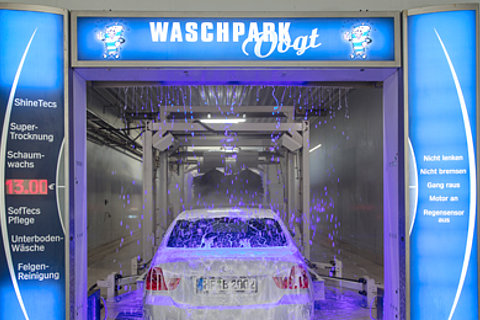 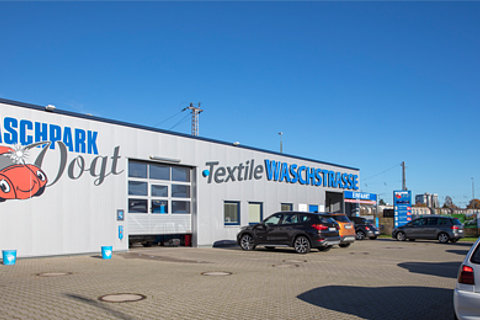 From Kleindienst gantry to WashTec SoftLine²

For 56 years and until a few weeks ago the Vogt family operated an Aral petrol station in Bünde, a town in north-eastern North Rhine-Westphalia. Even back in the 1970s, the petrol station was equipped with a gantry system for automatic vehicle washing. This system, a Super-Polish Combi, came from the then car wash manufacturer Kleindienst and was the first gantry system that specifically cleaned wheels as well. "The system eventually became too small. So we decided on a conveyor tunnel system for the petrol station premises," recalls the experienced car wash operator Andreas Vogt. Since the wash bay building was only 20 metres long and could not be extended, the choice as regards the technical equipment for conveyor tunnel system number one remained limited. Neither could it offer more space for the technology to go in conveyor tunnel system number two. "All these years later, the short track no longer met the requirements of the day, particularly since the vehicles were getting bigger. So in 2011, we finally decided to start building again," Andreas Vogt describes the situation at the time. The idea to build a new, modern car wash centre was born about a year before. "As it became more concrete, we hired a general contractor from Detmold, who put it all down on paper."

The choice of which manufacturer to use for the washing technology also remained unchanged. "In the many years of working together with the Augsburgers, I was always very satisfied with the washing results that the systems delivered and always got on well with the employees." In order to bring together our ideas for the future "Vogt car wash centre" and the experiences acquired from current car wash operations, "we first needed a new plot. When the town of Bünde offered us a new 3,500 square metre site along the railway line about 600 metres away from the petrol station site, we immediately took it." The rectangular plot resembled a towel and lent itself to building a 50-metre-long building for the conveyor tunnel system with five self-service car wash booths integrated into it and to install 12 covered vacuum stations behind it. The construction project and the planning of the conveyor tunnel system technology with WashTec took place in parallel. "The length of the chain shaft for the plastic conveyor belt was fixed at 36 metres. It formed the basis for the technology to be installed on WashTec's advanced, flexible and variable SoftLine2  model line, featuring virtually all the equipment options." In addition, the pre-wash area was to remain large enough to allow enough space for the pre-wash technology and to ensure good conditions for several pre-washers working at the same time. "You just have to see how the available space can be used to optimum effect."

Focus on pre-wash and results

During the planning phase, Andreas Vogt visited colleagues to find out about their washing technology and to pick up valuable tips for the construction of his own car wash centre. "For me, it was of particular interest to see what manual pre-washing does and what washing results are achieved when the customer exits the car wash." Andreas Vogt knew exactly which washing and preparation technology he wanted and from which manufacturer. He knew the technology well through the predecessor models. "They were basically just one size smaller than the technical ensemble we use today for washing, caring and drying." It was also clear that a biological water conditioning plant would be part of it. "What I did not really know from the outset was whether I would opt for a plastic conveyor belt or decide on a closed steel conveyor belt with drag rollers and rinse with osmosis water or not. Because of all the pros and cons, no one could make these decisions for me, so I had to make them myself. " Andreas Vogt opted for the plastic conveyor system and justifies his decision as follows: "Customers with sports rims and lowered cars are more likely to drive onto a plate rather than a chain. The sturdy plastic belt is not only easier to clean, but also offers a slightly wider track at 375 mm." And he decided shortly after commissioning still to go for an osmosis system. "An osmosis arch rinses the vehicles between the washing and care station because we have a very high microsiemens value (µS) in the fresh water, which fluctuates between 1,000 and 1,200 µS. The rotating cloths leave behind light streaks on the windscreen from about 800 µS." Since we have had the osmosis water, the vehicles come out spotless and streak free. Because we rinse with the osmosis system, we achieve an overall µS value of 600. You can definitely live with that," he concludes citing his good reasons.

The conveyor tunnel system technology, washing and care chemicals as well as water conditioning plant and osmosis system all come from different manufacturers. "It's all a bit of a jumble, but ultimately it delivers the results." However, his multi-manufacturer and supplier approach also shows that the system technology from the world market leader in vehicle washing is also able to work perfectly well with non-factory components. That speaks for the modern and highly efficient technology from the manual pre-wash to automatic washing and drying through to the safe exit at the WashTec's countdown traffic light in a weatherproof stainless steel design, which regulates the outgoing traffic.

Between the pre-washing technology and the LED traffic light is everything that in 2012 corresponded to the high-tech equipment features or was retrofitted. After the drive-in assistance to the plastic conveyor belt, features that immediately stand out today after a foam curtain are illuminated pre-rinse units installed on both sides for the wheels rims, which are also effectively cleaned downstream by longitudinal wheel and sill washers with lateral high-pressure support. This is followed by particularly effective high-pressure technology with four extremely powerful BPS spot spray nozzles oscillating up and down in order to reach the sill and side areas as well as the roof regions of the vehicle all-over. This is followed by the start up of the wash brush ensemble equipped with SofTecs® materials, which consists of a roof brush and four electronically in-fed side brushes before the vehicle reaches the care station and is subsequently pulled under the protection arch.

The drying ensues to the highest specifications. The linear technology blower dryer with its flexible construction tracks the contours of the vehicle's surfaces exactly, the two rotating roof nozzles blow air onto the surfaces at different angles to achieve even better drying and are supported by fixed, powerful side blowers. The textile brush dryer also moves linearly, thus extending the contact duration and improving the result due to its polishing-drying effect. The additional downstream, diagonally rotating cloth dryer with its absorbent and gentle cloths further enhances the drying result and makes all vehicles shine dried to perfection.

Perfect from the start

When Andreas Vogt won the Germany-wide carwash pro competition in 2014 in the conveyor tunnel system category, WashTec's SoftLine2 Vario was still relatively new. "I only took it into operation in 2012. It delivered very good wash results right from the start because we manually pre-clean each vehicle and each wheel rim thoroughly, without the customer having to pay extra. For all washing programmes, we not only clean with the high-pressure lance, but also with a foam brush. Some rims are very difficult to clean because of their struts and structure." Although very few, despite premium automatic equipment, there are still customers who report minor issues and say, "that the rims or the paintwork did not get clean. There are usually simple explanations, for example tree sap on the paintwork, baked on bird lime or firmly ingrained brake dust on the rims. "Anyone who has their vehicle washed and cared for in a car wash must be aware that it is a machine wash. Dissatisfied customers are welcome to go to the competitor. They soon come back, because the quality is significantly poorer there. People are very spoilt today, on the one hand they judge the washing result very precisely, but on the other hand, however, they are not prepared to pay for a high-quality wash programme."

He remains loyal to WashTec

Looking to the immediate future, Andreas Vogt concludes with the words: "If the town of Bünde agrees, we want to expand again. The 5,000 square metre neighbouring plot in the street 'Zum Stellwerk' has not yet been taken because there is still no decision as to which trade will be allowed to build on it. Thanks to the reliable and efficient WashTec technology, we are now washing two and a half times that of the conveyor tunnel system at the Aral petrol station site. In typical washing weather, however, we reach the limit of our performance at weekends, which to me seems too small for the conveyor tunnel system.

Consequently, Andreas Vogt has already been thinking ahead for quite some time and tells us: "If I do manage to build another car wash on the neighbouring site, there is certainly nothing to stop me from choosing technology from WashTec again. However, with the difference that the technology will be chosen so as to relieve the strain on the pre-washers. At peak times, we currently have five to six employees doing the pre-washing. I cannot increase the pre-wash team any more. In addition, I would like to have the speed of the belt increased slightly from the current nine metres per minute so as to be able to wash more cars, especially at weekends, without diminishing the quality of the wash result. The customer potential for this exists." Irrespective of this, Andreas Vogt wants to enter his conveyor tunnel system for a third time in the carwash pro competition. After his 2014 victory and third place in 2016, he hopes to achieve a high placement again. Somehow, WashTec is also there. A joint success would confirm the great performance on both sides in impressive style.