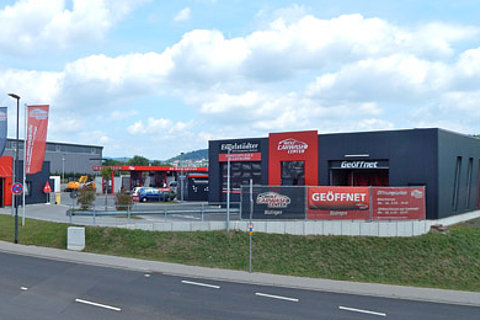 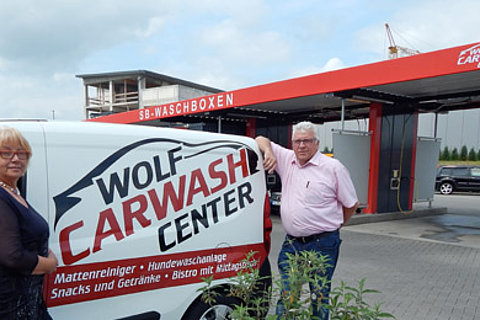 It was a long-cherished dream that entrepreneur Karl-Heinz Wolf has now fulfilled in retirement - the construction of a car wash centre. The only condition was a site in a prime location.

On the 13 November 2015, the Wolf household in Büdingen, Hesse, had two causes for celebration. Not only because Brigitte and Karl-Heinz Wolf were celebrating their 45th wedding anniversary, but also because this day marked the opening of the Wolf Car Wash Centre. In opening this centre, Karl-Heinz Wolf had fulfilled a dream for the time after managing his companies for disposal and recycling services as well the hire of work platforms and construction machinery, which he had made over to his sons Andreas and Thomas. "As I am not getting any younger, I thought to myself, if I can get my hands on a nice plot of land, right on the main road, with plenty of passing traffic, I could build a car wash along with everything that goes with it", says the 68-year-old explaining his decision. Many years ago, he had built a truck wash in his company.The decisive factor for the new project was ultimately the location. In the Reichhardsweide business park, he got plot No. 1, in the front row, directly on the roundabout and thus highly present for all passing vehicles. "We would not have invested in a plot in the second row, because there is not much passing traffic from other trades. The main road, however, has 9,000 passing vehicles a day. The roundabout is also a major advantage, as it allows easy access and does not deter those decide at the last moment as might a red traffic light", explains Wolf.In the planning phase, Wolf not only visited various trade fairs, but toured all over Germany and inspected various car washes and concepts."For me personally, it was important to see just how clean cars come out of car wash. Many concepts failed to convince me. Above all, I allowed myself to be convinced by the results achieved in practice, rather than just going by a product information sheet", says the operator. Three manufacturers were shortlisted, he conducted preliminary discussions and weighed up the pros and cons of the systems. "Good washing performance is just one aspect, as it is also important to consider the efficiency, maintenance and consumption costs", recommends Wolf. After settling on Washtec as the supplier, we finished off by visiting the factory in Augsburg. The fact that the service technicians from Washtec and Auwa live nearby and can intervene quickly, sealed the deal, even though the installation has been running smoothly since opening.

Today, customers can find everything on the approx. 4,500 square metre site to care for their beloved vehicles. From the main road, it is the car wash bay building that first catches the eye, as it sits prominently on top of a small hill, making it visible from far away. Only when driving up to the car wash centre does the full splendour of the installation come intoview. A self-service washing area with four booths and an outdoor washing area for highvehicles is available for do-it-yourself washers. A total of 14 partially roof-covered vacuumstations are available for cleaning the interior. A vending machine dispenses both selfservicecare products as well as refreshments.Those who prefer to leave the caring to somebody else, go to the vehicle valeter, who hasrented a separate part of the wash bay. The modern bistro with an outdoor area can beused for bridging waiting times, spending your lunch break or for simply just enjoying acoffee after the wash. And anyone with a friend on four legs in addition to the vehicle onfour wheels, can groom their pet in the dog wash facility. "Although it was not planned thatway, I had the idea in the back of my mind for a long time", says Wolf. His wife Brigittefinally clinched it, who saw the dog wash facility as a great USP and advertising medium.Today, the Prodogwash facility is increasingly catching on with customers.

The opening ceremony not only attracted the mayor and local press, but on two days also around 1,000 customers, who were able to test out the full capabilities of the centre for the price of five euros for a premium wash. "We wanted to show the customers what the car wash was capable of. Despite all our preparations, the rush took us by surprise and we quickly had to organise extra staff", Wolf recalls. To assist during the launch, Washtec provided an employee for two days; the installation ran without incidents, however. The washing results have never failed to convince through to today, as is reflected by the Internet rating of 4.8 out of 5 points. "After extensive consultation, we were persuaded to lay a slightly longer chain (32 metres) than planned, so as to allow the chemicals enough time to act", says Wolf. At the pre-wash station, two employees pre-wash the vehicles and remove coarse dirt to prevent the brushes from getting dirty. Prior to this, all vehicles pass through a pre-rinse arch, which works solely with water so as to cool the paintwork in summer or to free it from any leftover snow and ice in winter. On the recommendation of colleagues, Wolf also opted for a biological water conditioning system. The ASC 600 from Faritec provides 90 percent of the service water reconditioned, with fresh osmosis water only being used for rinsing.

The self-service system works with the Selftecs chemicals from the supplier Auwa and is designed on the basis of the Washtec colour concept, where every operating step and corresponding lance are colour coded with each other. "The colour concept is very popular. Customers, particularly foreigners with little knowledge of German, find it very easy to use", explains Wolf. The highlight is the foam lance with its rich pre-cleaner foam that adheres well, which is used by 80 percent of customers.
Commercial customers are also regular users of the facility, particularly since the pay station was converted to allow the car wash to be used with a customer card on account. Unfortunately, you always get the odd rogue customer. Since the self-service wash is open longer than the conveyor tunnel system, staff are not always on-site. For security reasons, Wolf has therefore installed 20 cameras on the premises, eight alone in the conveyor tunnel system. "This has helped us in a number of cases of damage or unjustified claims", reveals Wolf. In general, however, Karl-Heinz Wolf has plenty of reason to be pleased, particularly in his favourite  spot, at the exit to the conveyor tunnel system: "Seeing just how clean, shiny and dry the cars come out of the car wash, always brings a smile to my face."